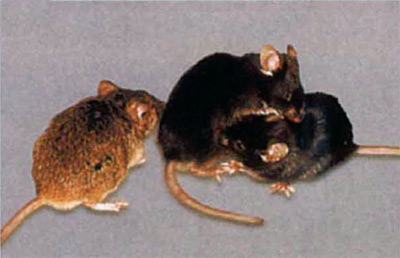 Mice lacking neurexin-1 (NRXN1), an autism-linked protein that helps stabilize the junctions between neurons, are highly aggressive, according to a study published 28 June in PLoS One1. These mice share a consistent genetic background, which may account for this being the first social deficit seen in mice lacking NRXN1.

NRXN1 protrudes from the signal-transmitting side of neuronal junctions, or synapses, and binds to neurexins on the opposite side. This interaction stabilizes active synapses and helps regulate neuronal signaling.

Mutations in both neurexins and neuroligins, including duplications and deletions that overlap with NRXN1, have been found in several people with autism. However, in mice, deleting NRXN1 does not seem to lead to social deficits.

One 2009 study found that mice missing both copies of the NRXN1 gene have deficits in neuronal signaling and groom more frequently than control mice do2. They also tend not to build nests in their cages — a typical mouse behavior that may be a proxy for maternal interest. In a 2012 study, researchers bred these mice with controls to generate mice that have one functional copy of NRXN1. These mice are quicker than controls to explore a novel environment, the study found3.

Neither set of mice exhibits social deficits, such as showing unusually low interest in other mice. This could be because both sets are on a mixed genetic background, meaning that even mice from the same litter may genetically differ from each other. Studies have shown that this type of variation can significantly influence mouse behavior.

In the new study, researchers crossed a mouse model of NRXN1 on a mixed C57BL6 and SV129 background for eight generations with C57BL6 mice. This generates mice lacking NRXN1 on a consistent C57BL6 background.

In an assay of sociability, these mice show more interest in another mouse in their cage than controls do. This is unusual, as mouse models of autism typically show the opposite tendency.

The results show the importance of genetic background when generating mouse models, the researchers say.