In new device, brain organoids ‘talk’ to each other 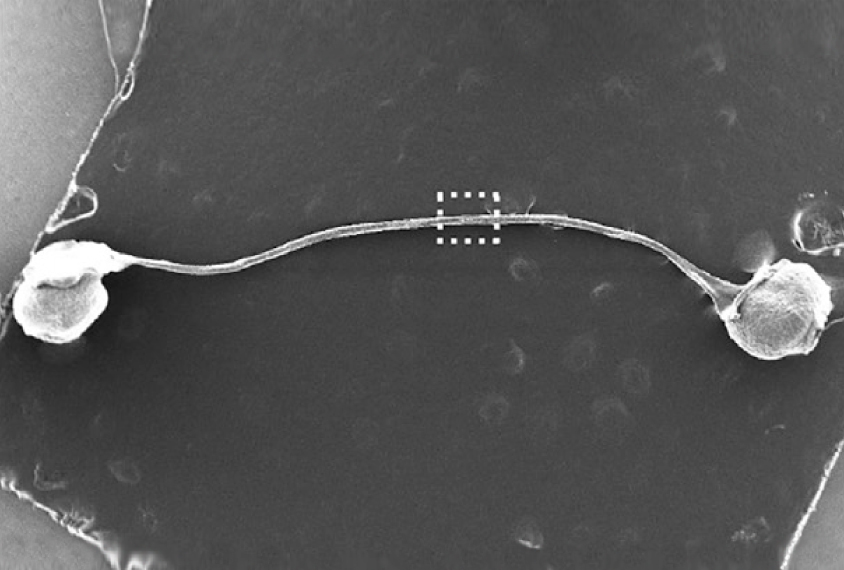 A novel cell culture device enables researchers to grow bundles of nerve fibers from stem cells, mimicking the tissue that connects distant parts of the brain1.

These bundles, or tracts, are thought to be altered in autism, so the approach may offer a way to study what goes awry in people with the condition.

Researchers know little about how the tracts form, however, in part because they haven’t been able to grow them in the lab. They have fused cerebral organoids — spheres of brain tissue made from human stem cells — but no tracts form in these experiments.

The new device comprises eight pairs of circular silicon chambers, each 1.5 millimeters wide. Each pair is connected by a narrow channel into which nerve fibers, or axons, tend to grow. Researchers placed a brain organoid in each chamber and cultured them for 50 days.

Organoid pairs generally formed a single axon bundle between them: Axons grew out from one chamber to connect to those extending from the other chamber about 80 percent of the time. By contrast, axons from organoids grown without the device extended in all directions.

Staining various parts of the organoids’ neurons with antibody markers showed that the tracts consist exclusively of axons, just as they do in the brain.

The researchers also tested the tracts’ electrical connections, using dyes that light up when neurons fire. When they passed a current through one organoid, the electrical impulse propagated to the other organoid, showing that the two were functionally linked.

The team also used the device to study how genetic factors affect tract formation. They created an organoid model of callosal agenesis, a congenital defect that prevents tracts from forming in the corpus callosum, which connects the brain’s two hemispheres.

Pairs of these organoids formed weak connections, with fewer axons assembling into bundles than they did in typical organoids. The work appeared in April in iScience. The ultimate goal, the researchers say, is to build a device capable of connecting multiple organoids.