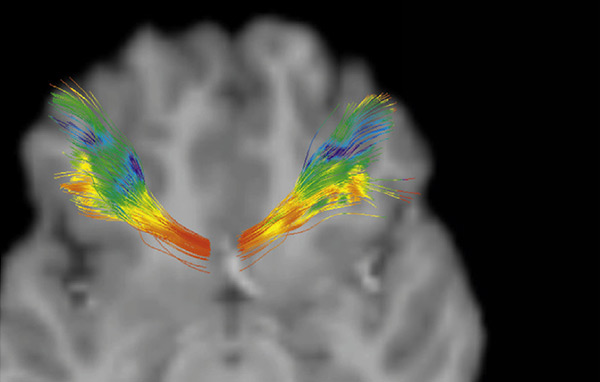 Twisting tracts: A new technique can map the brain’s nerve fibers, including how fibers fan out more (red) from some sections of the main tract than others (purple).

A new technique helps researchers trace the nerve fibers that connect brain regions by revealing how the fibers physically relate to curves and folds on the brain’s surface. The method was described 8 July in Medical Image Analysis1.

The technique examines the relationship between white matter, composed of nerve fibers and support cells, and gray matter, which is largely made of the cell bodies of the neurons the fibers sprout from. The groupings got their names long ago from their color, before researchers understood the connections between them.

White matter nerve fibers seem not to transmit signals as readily in children with autism as they do in controls, perhaps due to differences in the insulating support cells. Those differences may contribute to altered connectivity between brain regions, a popular theory to explain the disorder.

Typically, researchers trace the twists and turns of white matter by tracking the movement of water molecules through the brain — this type of magnetic resonance imaging (MRI) is called diffusion tensor imaging. Data from MRI are analyzed in cube-shaped units called voxels, which span about a millimeter per side, depending on the processing speed.

However, getting images of white matter can be challenging. For example, one technique can map the direction of thousands of fibers within each voxel and generate high-resolution information. But given that white matter fibers can extend 10 millimeters or longer when connecting distant brain regions, a handful of voxels are not informative on the overall picture.

The new method allows researchers to map the structure of entire bundles of nerve fibers, or tracts, without tracing individual fibers. It uses the relationship between tracts that run through the brain, and the folds and curves of gray matter that make up the outer regions of the brain — the cortex. Based on this relationship, researchers can use fewer data points to predict the route nerve fibers will follow from the surface into deeper brain regions.

To test whether the technique can detect abnormal brain structures, the researchers analyzed MRI scans from 19 boys with autism and 25 controls, ranging in age from 6 to 13 years. They looked at how much nerve fibers branch out from the main tract as it runs through the brain and at a measure of gray matter curvature in the cortex.

This preliminary finding supports the theory that autism involves early, hyperconnected and dense brain growth before an abnormal decline, the researchers say.