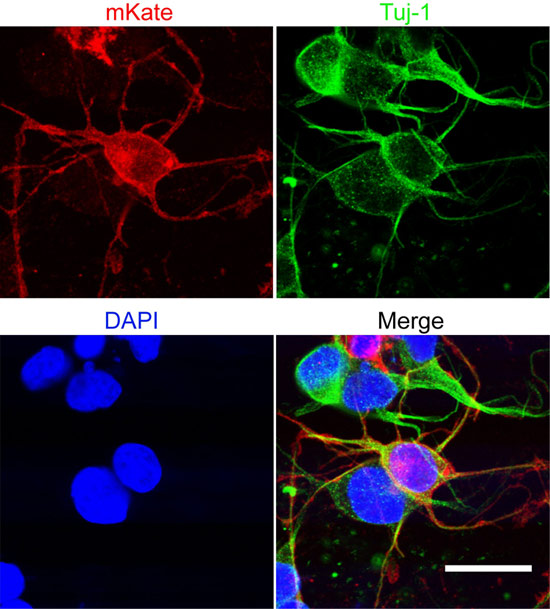 A new technique allows researchers to make stable modifications to neurons by incorporating modified amino acids into the proteins of stem cells, reports a study published in the August issue of Stem Cells1. The method permits researchers to investigate neuronal function in live, intact cells.

In the study, researchers inserted fluorescent molecules into neuronal membranes, which then report on the status of electrical signals that travel across the neuron’s projections.

Ribosomes assemble proteins by translating three-letter genetic codes into amino acids, the building blocks of proteins. Numerous transfer RNAs (tRNAs), adaptor molecules that assist in translation, read the code on one end and insert the appropriate amino acid at the other.

Previous studies have described artificial tRNAs which, in cooperation with another engineered molecule, insert synthetic amino acids with additional functions such as fluorescence.

These techniques involve expressing the engineered tRNA in mature cells, but only transiently. By using a virus to insert the DNA that codes for these molecules into stem cells, the new technique can be used on a large scale to induce permanent changes. The altered stem cells could also be used to generate modified mice.

The researchers showed that the modified stem cells differentiate into functional neurons. They then inserted a fluorescent amino acid into a protein that makes up a membrane channel for potassium ions. This channel’s function is dependent on changes in the electrical currents that pass across neurons.

The modified protein reports these currents with a burst of fluorescence, allowing researchers to track the electrical pulse across the long finger of the neuron.