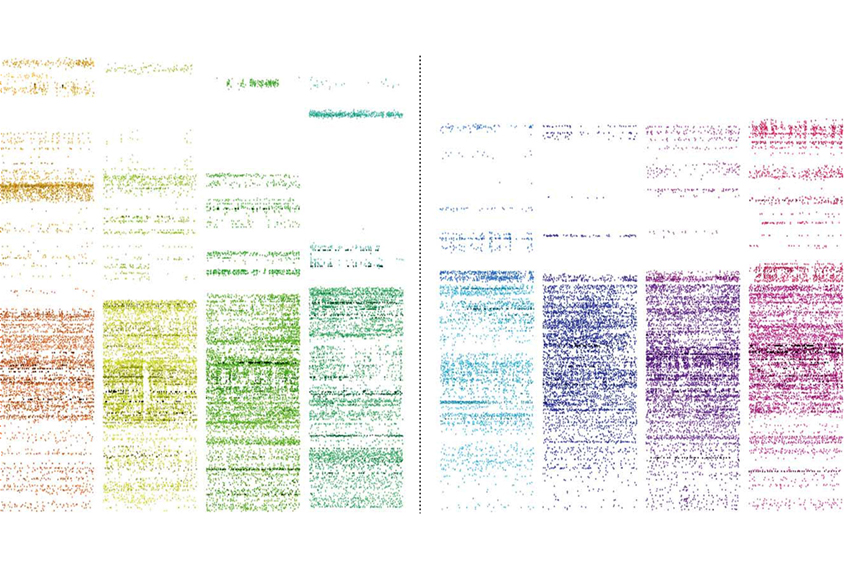 High-density device: Researchers used two probes and recorded from different subsets of sensors over time (different colors) to capture neurons spiking at more than 6,000 sites in the brain of a mouse.

A new iteration of a popular probe enables researchers to record activity at thousands of sites across the mouse brain and track the activity of individual neurons over months — providing long-term recording at an unprecedented scale.

Scientists could use the probe to study mouse models of autism and examine differences in brain activity that underlie the condition, its creators say.

To understand processes such as learning and memory, researchers have to track the same group of neurons or individual neurons for a long period of time, ideally in a freely moving animal. With time, however, recording devices that monitor individual cells often jostle out of place or cause tissue damage. Most devices can track only about one or two dozen neurons over the course of weeks or months. And many devices that can record large populations of neurons are too big or heavy to be used in freely moving mice.

To address these problems, researchers built a miniature version of a widely used probe called Neuropixels, first released in 2017. The new iteration, described in April in Science, is about a third of the size of the original and packs in more than five times as many recording sites per probe. The researchers also optimized the probe’s design for long-term recording and built software that corrects for movement of a mouse’s brain or the probe.

The new probe, called Neuropixels 2.0, sits on top of a mouse’s head and has four thin filaments, each dotted with two columns of recording sites, that insert into the brain. Each probe holds more than 5,000 sites, although researchers can only use a subset of 384 at a time. The device is also small and light enough that researchers can mount two probes simultaneously on a freely moving mouse.

Researchers in six different labs tested the probe, monitoring the brain activity of 21 mice and rats in total. In 20 of the animals, a team was able to record neuronal activity for at least eight weeks — and could likely continue to do so for much longer, they reported. In one mouse, researchers recorded brain activity for almost a year.

The probe’s design helps to correct any signal distortions caused by an animal’s movements. Because of the high density and linear arrangement of the recording sites, if a neuron shifts its place, a neighboring recording site will still pick up the cell’s activity. To take advantage of that, the team developed an algorithm that detects movements based on the specific depth and amplitude of neuron spikes and then realigns matching recordings from individual neurons.

In one test, the team fixed mice in place and monitored brain activity while a second device shifted the probe up and down. The algorithm largely eliminated movement distortions from these recordings, the researchers reported. It also increased the number of neurons the team could consistently record from over time.

In another experiment, the researchers created a slightly different version of the algorithm and used it to correct for movements that occurred between recording sessions that took place days or weeks apart. To assess whether it had tracked the same neurons over time, they showed mice a series of 112 images that elicited a unique response in different neurons in the visual cortex. They then evaluated whether a neuron tracked by the algorithm had a similar response to the images across sessions, suggesting that the recordings correspond to the same neuron.

When recording sessions were 16 or fewer days apart, the algorithm successfully tracked about 93 percent of the neurons, the researchers reported. For sessions three to nine weeks apart, it could track about 85 percent of neurons. The findings suggest that researchers could potentially follow thousands of individual neurons over weeks or months, the researchers say.