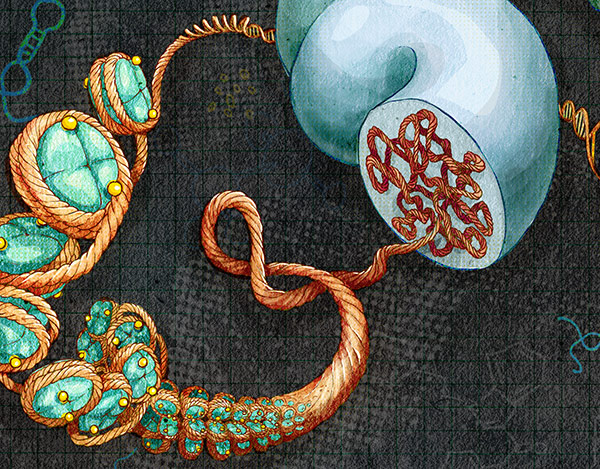 A new strategy sharpens the analysis of chemical tags on the DNA-protein complexes that regulate gene expression. The method, described 4 June in Molecular Cell, may help researchers decipher how gene expression goes awry in disorders such as autism1.

DNA is usually wound around protein spools called histones. In some cases, the weave is too tight for the machinery that transcribes DNA into RNA — as the first step in protein production — to gain access to the DNA.

Some autism genes control the tightness of the DNA coil by tagging histones with methyl groups. These chemical tags can either expose or hide a stretch of DNA, affecting the expression of genes in that stretch.

To map the patterns of these tags, researchers chop up the DNA-protein complex, called chromatin, and use antibodies to bind and locate the tagged histones. They then sequence the DNA wound around histones to identify the genes affected.

This method, called chromatin immunoprecipitation (ChIP)-seq, can be unreliable, however, especially when used to compare modification patterns across samples. Different batches of antibodies can yield inconsistent results, and other experimental conditions can also alter the findings.

The new method, a variation of ChIP called Internal Standard Calibrated ChIP (ICeChIP), addresses these problems by inserting semi-synthetic pieces of chromatin. These pieces bear known chemical tags and can be identified via unique DNA ‘barcodes.’

Using these chromatin segments as benchmarks, researchers can count the copies of a DNA region that are wound around histones with various methyl tags. Getting this calibrated proportion of modified histones allows researchers to make accurate comparisons across samples.

In the study, the researchers used the method to calculate levels of different histone modifications in embryonic mouse stem cells and embryonic human kidney cells. They found that methyl-group patterns and levels are reproducible and that ICeChIP is robust even when they vary the experimental conditions.

In the mouse stem cells, the researchers showed that two antibodies widely used in ChIP bind to methyl marks other than the type they are intended to target. As a result, using them inflates the levels of certain types of histone modification.

The researchers say that ICeChIP is not limited to analyzing histone methylation. It can also be used to quantify other chromatin modifications, such as the addition of acetyl groups, which also influences gene expression.