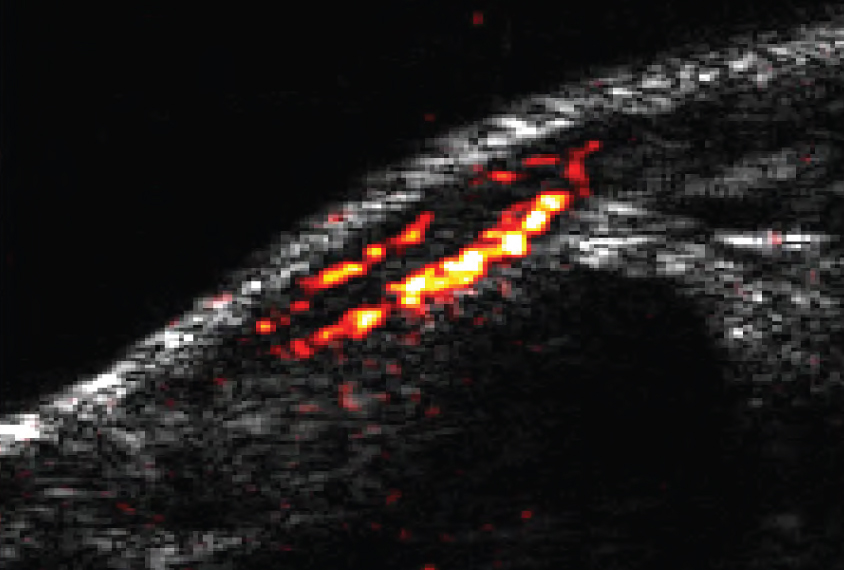 Sound it out: Tumor cells expressing certain bacterial genes stand out (red and yellow) in an ultrasound image.

A new technique uses ultrasound instead of light to detect gene expression in cells 1.

Researchers can use the technique to label cultured cells and detect them via a basic ultrasound device. They could eventually use it to track cells that express certain genes — such as autism candidates — that have been transplanted into a mouse brain or are present in brain organoids.

Scientists typically track gene expression in living cells by attaching a fluorescent protein to the gene. But light does not penetrate tissues well, so the method does not work for tissues deep inside the brain or body.

The new method relies on sound waves, which can penetrate overlying tissues, enabling scientists to identify gene expression anywhere in the body with a noninvasive scan.

The researchers first engineered a novel cell marker that sound waves can pick up: tiny gas-filled vesicles. Some aquatic bacteria produce these bubbles to stay buoyant.

The researchers inserted nine bacterial genes that encode the vesicles into cultured human kidney cells. They inserted a switch so that the genes are expressed only in the presence of the antibiotic doxycycline.

The deflection of sound waves clearly revealed the presence of the vesicles on an ultrasound monitor. The researchers counted 45 vesicles per cell on average.

The team then grafted a cluster of tumor cells containing the genes into the flank of a live mouse. Pulsing the hip with ultrasound identified the tumor tissue by detecting the vesicles the tumor cells contained. By contrast, a microscope could not detect tumor cells expressing a fluorescent protein in a mouse flank. The work appeared in September in Science.

The researchers aim to integrate the vesicle genes into an animal’s genome so that they can track gene expression in the animal’s own cells.