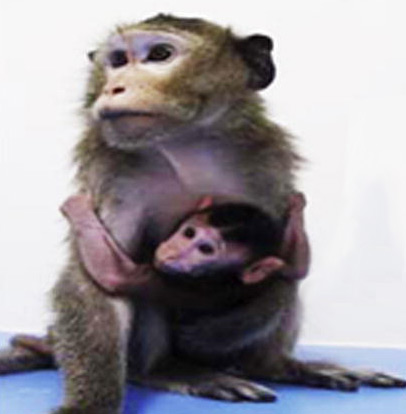 Test-tube baby: A 3-month-old macaque was born with a mutation that leads to Rett syndrome but so far does not show any symptoms of the disorder.

Researchers have created the first genetic monkey model of autism, they reported 6 March in Cell Stem Cell1. The female monkey has a mutated version of the MeCP2 gene that causes Rett syndrome.

Genetically engineered monkeys would allow researchers to study the effects of various mutations on the brain and behavior of primates, which are closely related to people. This is particularly useful for disorders such as autism, which manifest as complex social behaviors that are difficult to study in mice or flies.

The researchers focused on mutations in MeCP2, which in people causes Rett syndrome — a disorder characterized by a sudden loss of language and motor skills around 1 year of age. They used molecular scissors, known as TALENs, to insert mutations into the MeCP2 gene in fertilized eggs taken from donor monkeys.

These scissors can insert multiple mutations into the gene, increasing the probability of success. This approach yielded MeCP2 mutations in as many as half of the targeted eggs, the study found.

Because MeCP2 is located on the X chromosome, mutations in the gene are generally lethal in human males, and Rett syndrome is almost always seen in females. The results from the macaques suggest that MeCP2 mutations in males may be lethal in monkey males as well and cause spontaneous abortions, the researchers say.

One cynomolgus monkey gave birth to a female infant with a mutation in the MeCP2 gene that changes a single amino acid. Most MeCP2 mutations in people are of this kind. The monkey did not show any symptoms at 4 months of age but may develop them later, as girls with Rett syndrome do. Four cynomolgus mothers were still pregnant at the time of publication.

The researchers are continuing to monitor the baby and are generating more MeCP2 mutant monkeys with other mutations.