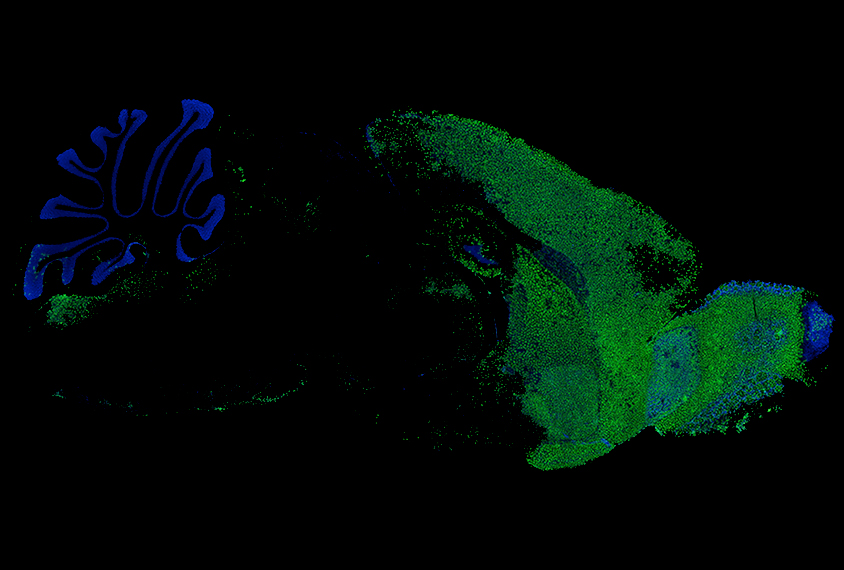 Crossing species: Human microglia transplanted to mice function like they do inside people.

A new technique allows researchers to transplant human microglia into mouse brains, a model that might shed light on the association between these cells and autism1.

During development, these brain immune cells prune away extra synapses, or the connections between neurons. They also respond to pathogens and injury. Because microglia help shape the developing brain, they are associated with autism, but the exact role they play is unknown.

Studying microglia has proved difficult, however. Investigating the cells in animal models can shed light on basic biology but is less relevant to conditions in people, researchers say. And studying human microglia is problematic because the cells express different genes in culture than they do in the brain.

As a workaround, researchers have created a ‘chimeric’ model, featuring human microglia transplanted into live mouse brains. The transplants come from human skin cells, reprogrammed to develop into microglia. Once they are placed in the mouse brains, the microglia behave more as they would in a human brain than in culture.

Researchers genetically modified the host mice to suppress the animals’ immune systems and to produce a human protein that helps the microglia survive. One drawback of the technique is that immune suppression may alter how the microglia interact with other immune cells in the animals.

In another study, researchers labeled microglia by introducing fluorescent tags via the CRISPR gene-editing system2. A second CRISPR mutation introduces the gene for Cre recombinase, an enzyme that, depending on its location, can turn other genes on or off in the presence of a drug called tamoxifen. Using this method, researchers can manipulate gene expression in the transplanted microglia and study their development in autism mouse models.