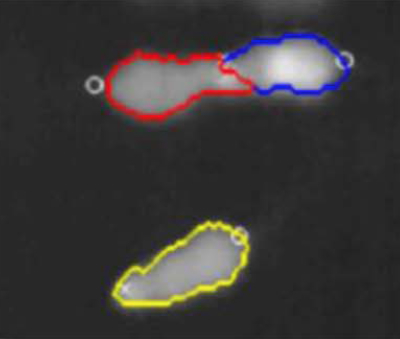 Shape tracker: Using images taken by a heat-sensing camera, a new software algorithm can detect and track the outlines of individual mice.

Researchers have developed software that can automatically track and catalog the behavior of up to four mice at once, according to a study published 16 September in PLoS One1.

Mice can be powerful models for autism research because they are easy to manipulate genetically. Researchers can turn certain genes on or off in certain cell types or at certain stages of development and monitor how this affects behavior. But when it comes to assessing social behavior — one of the key features affected in autism — things become much trickier.

The classic method for studying social deficits in mice is the so-called ‘three-chamber test.’ In this test, researchers observe whether a particular mouse prefers a chamber containing another mouse to an empty one. But this test doesn’t categorize types of behavior — for example, distinguishing socializing from aggression. The alternative — allowing mice to interact freely and watching hours of video to rate their behavior — is labor-intensive and subjective.

There are some ways to automate this process, but it is difficult to reliably distinguish more than one or two mice in the cage at a time. The new study describes an algorithm that combines information from both a video camera and a heat-sensing camera to track up to four mice at the same time.

For 6.5 hours of video footage, manual ratings performed by two different people are as similar to each other as they are to the computerized method, the study found.

The method also detects differences between BTBR mice, which are known to be unusually solitary, and B6 mice. BTBR mice are less likely to sniff other mice and more likely to sit alone in the cage than are B6 mice, the study found.