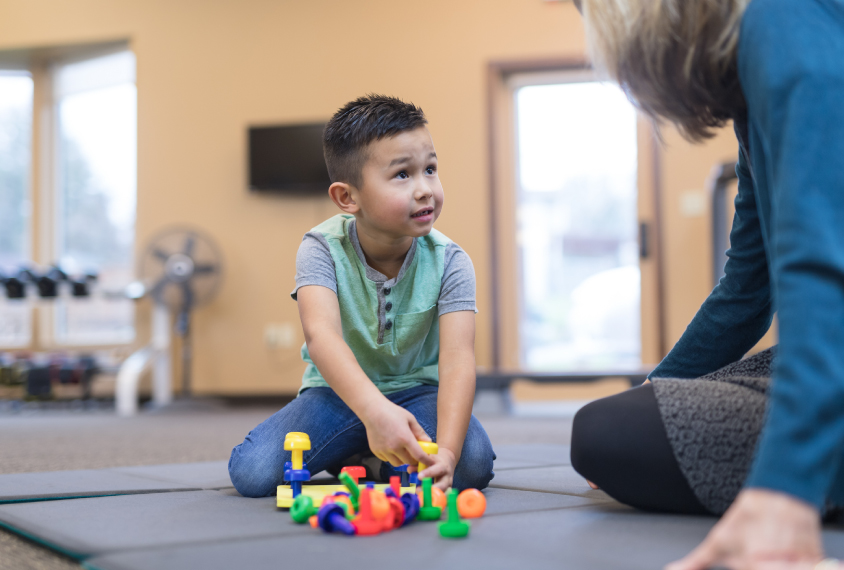 Opening up: In pivotal response treatment, parents find ways to encourage a child to speak during play sessions.

PRT therapists use various strategies to motivate autistic children to talk during play. For instance, they may name a toy that a child shows interest in, but hand it over only if the child then requests it by name. They also teach parents to use similar strategies in their daily routines.

The treatment has been shown to improve communication skills and ease autism traits when therapists implement it2. It is also effective when trained parents deliver it3. The new work explores its effectiveness when both parents and therapists are involved, as the therapy’s creators intended.

“We don’t yet have very much information about the effects of combining clinician-delivered and parent-training for PRT in a controlled trial,” says co-lead investigator Grace Gengoux, clinical associate professor of psychiatry and behavioral sciences at Stanford University in California.

Gengoux and her colleagues found that 23 autistic children who received PRT for six months spoke more words and interacted with their parents more than did 20 controls. The findings appeared 6 August in Pediatrics.

“Changes within the parent-child interaction are incredibly important,” because they may help the child gain even more skills over time, says Brooke Ingersoll, associate professor of psychology at Michigan State University in East Lansing, who was not involved in the study. “Over time, you will see so many more opportunities for the child to use their skills, and that will lead to broader changes.”

Gengoux and her colleagues began with 48 children aged 2 to 5 years who have language delay; 24 of the children got PRT, and the other half were controls who could opt to receive PRT after the study ended. (They had to exclude one child in the treatment group and four controls from their analysis.) Most of the children in both groups also received an average of eight hours per week of a standard therapy called applied behavior analysis (ABA), and virtually all had some speech therapy.

The therapists treated the children at home for 10 hours each week for the first three months, and five hours every week thereafter. They also trained the children’s parents in using PRT strategies at home.

At the beginning and end of the study, the researchers took 10-minute videos of the parents playing with the children and coaxing them to communicate. They tallied how many times each child spoke during these sessions. They rated the severity of the children’s autism traits using a standard scale and assessed their social-communication skills. (The researchers did not know which children received PRT.) The parents also rated their child’s language and social skills.

Children in both groups averaged about 50 utterances at the start of the study. At the end, those who had received PRT averaged 71 utterances; the number remained unchanged for controls. The treatment also decreased the severity of autism traits relative to the other treatments.

The researchers’ severity ratings also suggest that the treatment eases social communication difficulties, and parent reports suggest it boosts the children’s vocabulary. However, PRT does not seem to improve sociability, communication, cognition or motor development any more than standard therapies do.

“What they didn’t see was a lot of generalization,” says Aubyn Stahmer, director of community-based treatment research at the MIND Institute of the University of California, Davis, who was not involved in the study. She says that improvements in other skill sets may emerge after a longer period of time, however.

To look for improvements over time, Gengoux and her colleagues plan to reassess all of the children from the PRT group after six months. Also, they are scanning the brains of a group of children who receive PRT to try to identify structures or activity patterns that predict response to the treatment or that change in response to it.