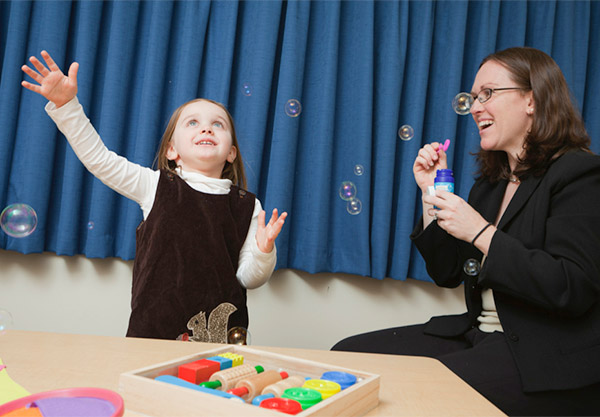 After four months of a behavioral therapy known as pivotal response training (PRT), six children with autism show improved behavior and enhanced activity in brain regions that process social information. Researchers presented these preliminary results from a trial of PRT yesterday at the 2014 Society for Neuroscience annual meeting in Washington, D.C.

However, when looking at pictures of faces, children who receive treatment tend to fixate even more on the mouth than on the eyes than they did before treatment — the opposite of what you would expect from an effective autism therapy.

These seemingly contradictory, or at least inconclusive, results need to be confirmed in a larger group of children. Still, the researchers say there is a clear change in brain activity that is worth exploring further.

The change in brain activity seen in the treated children may track with the behavioral changes they show in response to treatment, says Gabriela Rosenblau, a postdoctoral associate in Kevin Pelphrey’s lab at Yale University, who presented the work. The improvements may represent useful markers for the effectiveness of autism treatments, she adds.

“We don’t have good ways to measure that,” says Gabriel Dichter, associate professor of psychiatry at the University of North Carolina, Chapel Hill, who was not involved in the work. “I think this work will really move us in the right direction in terms of empirically valid biomarkers of treatment response in autism.”

The researchers used eye tracking to monitor the children’s gaze before and after treatment. They showed the children a series of 24 faces and monitored how often the children looked at the eyes and mouth. They have data for only nine of the children with autism in the treatment group, but their preliminary analysis reveals no change in fixations on eyes, and a slight increase in fixations on mouths.

“I actually would have expected the opposite, so I’m not sure why they’re seeing that,” says April Levin, a child neurologist at Boston Children’s Hospital, who was not involved in the study. “That could be a compensatory response of some sort, indicating that these children use the mouth instead of the eyes to get more social information.”

The researchers used functional magnetic resonance imaging (fMRI) to examine brain activity as the children looked at a series of six pictures of expressionless faces, followed by a series of six pictures of houses. They focused on brain regions that typically show greater activation in response to faces than to houses. So far, they have data from 6 controls and 13 children with autism prior to treatment.

By contrast, children with autism show stronger activation in posterior areas of the brain, such as the visual cortex, when looking at pictures of houses. “That shows that people with autism seem to have hyperactivity in these regions when looking at objects compared to social stimuli,” Rosenblau says.

Although the finding is preliminary, Rosenblau says, it suggests that the treatment normalizes some of the brain activity in children with autism.

“It’s very interesting and encouraging that this form of behavioral rescues activity in this brain region,” Dichter says.

Six of the seven children with autism who received treatment and completed the fMRI analyses also showed a decrease in the severity of their autism symptoms, as measured by the Autism Diagnostic Observation Schedule.

Rosenblau cautions against drawing big conclusions from these preliminary data, but says she hopes to publish findings from a larger group of children early next year. “You see there is something in there that needs to be pursued.”