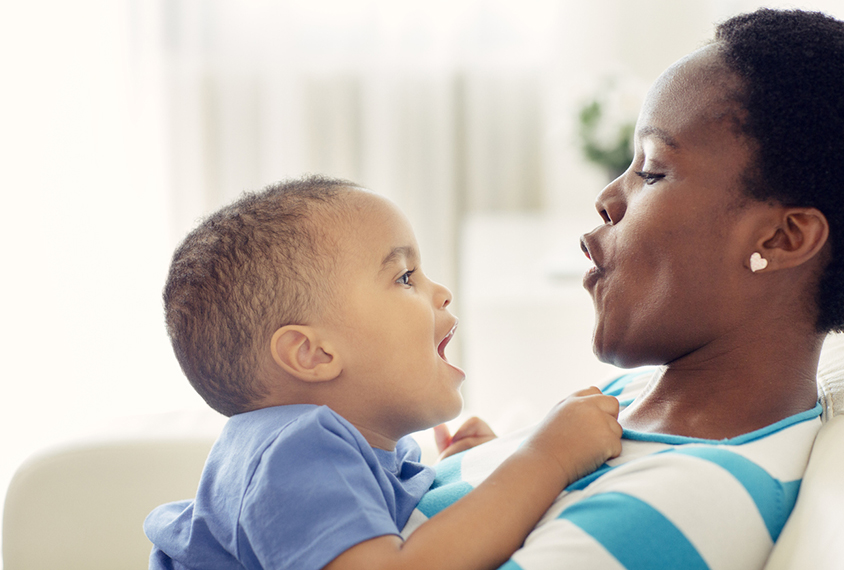 Word up: Teaching parents to interact with their babies might improve the babies’ language comprehension.

An experimental behavioral therapy delivered by parents does not improve autism traits in babies who screen positive for the condition, according to a new study1.

The results are disappointing, say independent experts, because they had high hopes for this particular approach’s promise in mitigating the severity of autism traits.

A 2015 study had suggested that the therapy decreases traits of autism in toddlers who have an older sibling with autism — and so are at an increased risk for the condition. The new study is the first to rigorously test the therapy in babies with no family history of autism.

The researchers started babies on the therapy between 9 and 14 months of age. Six months later, according to parent reports, the children who received the therapy spoke and understood more words than those who did not. But when the researchers evaluated the same children, they did not detect a statistically significant difference between the two groups.

“There was some evidence that we were able to improve the communication abilities of these little infants,” says lead investigator Andrew Whitehouse, professor of autism research at the Telethon Kids Institute in Perth, Australia. But “it’s difficult to determine whether this finding is influenced by bias in the parents.”

Whitehouse and his colleagues randomly assigned the babies to the treatment or control groups and did not know which children had received the treatment when they evaluated the children.

This design makes the study among the most trustworthy tests of a behavioral therapy for autism to date, say experts not involved in the work.

“This group did a really rigorous controlled study,” says Connie Kasari, professor of human development and psychology at the University of California, Los Angeles, who wrote a commentary on the study2. It’s unclear why the treatment had limited success in this case, she says, but it’s unlikely that any single strategy would work for all families. She argues for a personalized approach to early intervention. “We really need to rethink preemptive interventions for kids at risk [of autism],” she says.

The researchers studied 103 infants who screened positive for autism on the Social Attention and Communication Surveillance checklist, a tool widely used in Australia.

Parents of 50 of the infants learned to administer the new therapy during 10 sessions with therapists in their homes, once every other week. During the sessions, the parents watched videos of themselves interacting with their baby and received feedback from the therapist on how to respond to the baby’s vocalizations, facial expressions and gestures. They practiced the skills for at least 15 minutes a day during the study’s five-month period.

Of the 53 babies in the control group, 27 received other treatments elsewhere, such as speech and language therapy; the others did not receive any treatment.

At the start and the end of the study the researchers measured each child’s autism traits, such as avoiding eye contact and not responding to their name, using the Autism Observational Scale for Infants. They also assessed the children’s language and motor development and the quality of the parents’ interactions with their babies. Parents completed standard questionnaires about their child’s sociability, communication abilities, daily living skills, word comprehension and word use.

The training eased autism traits in the babies and improved parent-child interactions overall. But the babies in the control group showed similar improvements. The results appeared 16 July in Lancet Child & Adolescent Health.

“If you look at our data, the treatment group certainly improved on almost every measure,” Whitehouse says. So the study’s largely negative results, he says, “might simply reflect that the control group also improved because of the treatments that they received in the community.”

Parents suggested that the treatment had a bigger impact than the other therapies, however: They reported improvements in their children’s communication abilities, word comprehension and word use — especially in the ability to understand what someone else says.

“The most exciting findings were related to the receptive language improvements,” says Linda Watson, professor of speech and hearing sciences at the University of North Carolina at Chapel Hill, who did not work on the study. Clinician assessments also hinted at these improvements, she says, although the result did not reach statistical significance.

Some experts note that the tests used to screen for autism are not fully accurate.

“If you don’t know the kid has autism for sure, you’re kind of treating kids who may not need it,” says Fred Volkmar, professor of child psychiatry, pediatrics and psychology at Yale University’s Child Study Center, who was not involved in the study. “I would like to see this done in another sample, maybe a more focused sample where there was a better indication of a very clear risk for autism.”

The researchers are following the children in the study to assess whether their improvements persist. They also plan to test whether the therapy decreases a child’s chances of an autism diagnosis or eases autism traits at age 3.