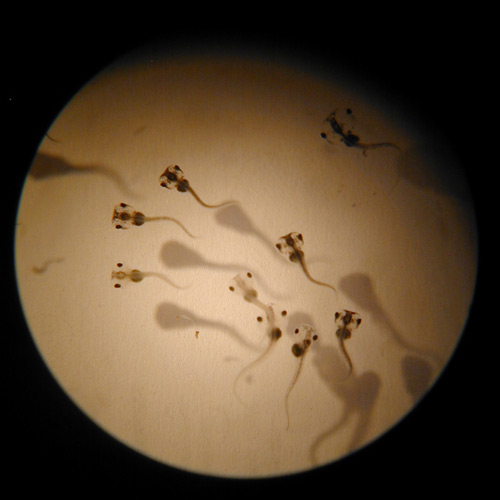 Valproic acid (VPA), an epilepsy drug that increases the risk of autism, may alter neural circuits by opening up chromatin, a tightly packaged form of DNA in the nucleus. Researchers presented the unpublished data today at the 2014 Society for Neuroscience annual meeting in Washington, D.C.

The study looked at the effects of VPA on tadpoles. Tadpoles are useful for studying neural circuits because they are transparent. According to work presented at last year’s Society for Neuroscience annual meeting, tadpoles exposed to VPA do not swim in groups — indicating abnormal social behavior — are highly sensitive to sensory stimuli such as startling sounds and have overly connected and excitable brain circuits. But it’s unclear exactly how VPA exposure leads to these symptoms.

VPA has many well-known biological effects: It inhibits the enzymes that break down the neurotransmitter gamma-aminobutyric acid (GABA) and blocks certain ion channels. It also inhibits a class of enzymes known as histone deacetylases (HDACs)1.

These enzymes remove chemical tags known as acetyl groups from the surfaces of histones, the proteins around which DNA winds to form chromatin. Removing the acetyl tags causes DNA to loop more tightly around histones, blocking access to the DNA for proteins that control gene expression. By contrast, inhibiting the enzymes as VPA does loosens DNA’s grip on histones, giving proteins controlling gene expression unfettered access to the DNA.

“There’s much less that we know about the effect of HDAC inhibitors, or even HDACs in general, in nervous system development,” says Eric James, a graduate student in Carlos Aizenman’s lab at Brown University in Providence, Rhode Island, who presented the work. But altering HDACs during the development and pruning of neuronal connections could have drastic effects, he says.

To find out whether VPA’s effects on neural circuits are linked to its ability to inhibit HDACs and unpack DNA, the researchers recorded the activity of single neurons and circuits in tadpoles exposed to other known HDAC inhibitors. Both of the inhibitors used in the study — suberoylanilide hydroxamic acid (SAHA) and mocetinostat — inhibit many of the same HDACs as VPA does, but do not affect GABA or ion channels.

The researchers found that these drugs mimic many of the effects of VPA on neuronal activity and connectivity in tadpoles. All three drugs increased the frequency of spontaneous excitatory signals at neuronal junctions, or synapses, and enhanced the connectivity of neural circuits.

“These data suggest that the HDAC-inhibiting property of valproic acid does account for some of the phenotypes that we ultimately see,” James says.

SAHA and mocetinostat did not mimic all of the effects seen in response to VPA treatment, however. Individual neurons showed a decrease in their excitability after VPA treatment, but an increase after SAHA or mocetinostat treatment. James says this may reflect differences in the specificities of the drugs for various molecular targets.

The team aims to look at whether the two drugs mimic VPA’s effects on behavior in tadpoles. James is also looking into whether the three drugs modulate the expression of similar genes. “We can probably use that information to identify potential targets that can be manipulated to try to rescue this phenotype,” James says.