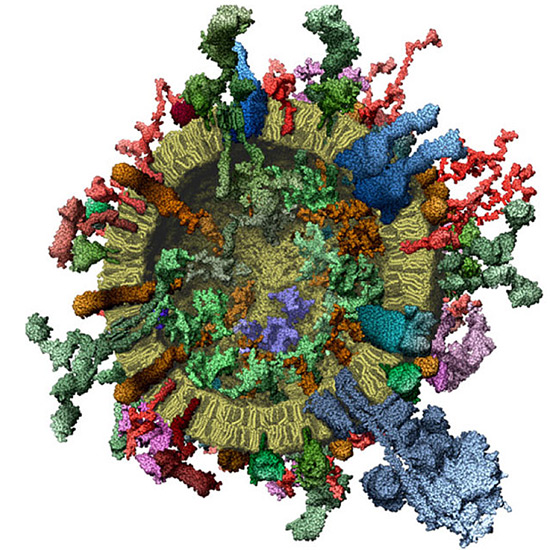 Elsevier/Cell  Solid structure: In the hunt for autism’s origins, synaptic proteins have been the most promising leads.

The candidate genes — SHANK2, NCAM2, CACNA1B and DOC2A — have one thing in common: they encode proteins that are needed for the healthy function of synapses, the junctions between neurons.

The research supports the idea that autism arises from faulty neuron signaling. It could also help explain why individuals with autism often have mental retardation and a family history of other psychiatric diseases, such as schizophrenia and depression, researchers say.

“It’s tempting to speculate that the synapse plays a particularly important role in these clinical disorders,” says Gudrun Rappold, head of human molecular genetics at the University of Heidelberg.

In the 16 May Nature Genetics, Rappold and colleagues reported that 10 people diagnosed with autism, mental retardation or both carry rare mutations in SHANK2, which encodes a scaffolding protein at the synapse1.

Finally, in the 20 May Proceedings of the National Academy of Sciences, Hakon Hakonarson and colleagues at the Children’s Hospital of Philadelphia reported that people with schizophrenia are more likely to have CNVs in two genes involved in the controlled release of neurotransmitters at the synapse2.

In the hunt for autism’s biological basis, synaptic proteins have long been the most promising leads. For example, early linkage studies implicated reelin3 — which helps strengthen synapses, and is necessary for proper development of dendritic spines on the receiving end of the synapse — and the serotonin transporter gene4, which moves the neurotransmitter in and out of the synapse.

The new Nature Genetics study is the first to implicate a related gene, SHANK2. The researchers performed a whole-genome search for CNVs in 184 individuals with mental retardation and 396 with autism, and found one person in each group who carries a CNV in SHANK2. After fully sequencing the gene in both groups, the scientists found SHANK2 mutations in eight additional participants.

Interestingly, four male participants with autism inherited SHANK2 mutations from mothers who do not have the disorder, but do have anxiety or depression. Studies of autism-linked CNVs in other regions of the genome have found a similar kind of maternal transmission. “Of course, we have no clue why,” Rappold notes.

Rappold’s team is introducing these SHANK2 mutations in mouse neurons to explore how they affect synapse function.

One of the new candidates, NCAM2, keeps synapses stuck together. Daniel Notterman and colleagues searched for inherited deletions in participants of the Autism Genetic Resource Exchange (AGRE), a large gene bank of families with at least two children who have autism.

The team compared the frequency of deletions among 3,742 participants from AGRE and 6,317 healthy controls. They found that four genes are mutated more often in the AGRE families than in controls. Two of these — NRXN1 and CNTNAP2 — have previously been associated with autism. The other two, NCAM2 and protein tyrosine phosphatase receptor type D (PTPRD), are new.

Because synaptic genes are some of the largest in the genome, they’re the most likely to be hit by CNVs, says Notterman, professor of pediatrics and molecular biology at Penn State College of Medicine.

By analyzing postmortem brain tissue of a 1-year-old child, Notterman’s team found that NCAM2 is expressed at synapses in the hippocampus — an active region for learning and memory — and the cerebellum, which is important for movement. Both areas have been implicated in autism.

This family of cell adhesion molecules is clearly important in autism, Hakonarson says.

Last year, Hakonarson’s team identified two other adhesion genes — cadherin 9 and cadherin 10 — in the first study of common variants in autism5. That screen also identified NCAM2 as a candidate, but not to statistical significance, he says.

In their new study, Hakonarson and his colleagues scanned the genomes of 1,735 adults with schizophrenia and 3,485 healthy controls, and found eight CNVs that crop up more frequently in the schizophrenia group.

Two of the most significant associations affect CACNA1B and DOC2A, which encode calcium-signaling proteins that control the release of chemical messengers at the synapse.

This discovery may open up new possibilities for drug treatments. Available drugs for schizophrenia target ubiquitous brain receptors that are needed for many functions. Hakonarson’s study suggests that a better option might be drugs aimed at regulating calcium signaling.

“All of these new studies give you a clue about the specific product involved, and therefore you can move from treating symptoms to treating causes,” Hakonarson says.