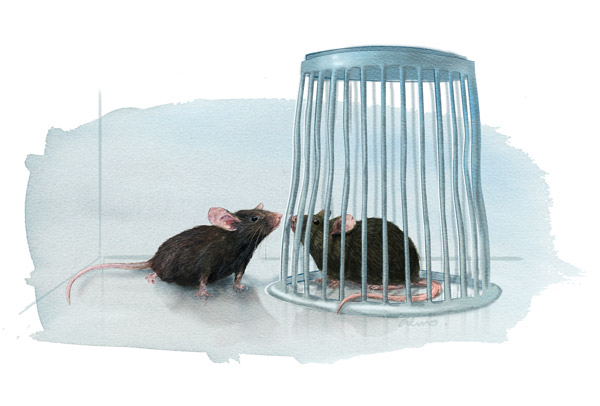 Mice missing a swath of chromosome 16 — a genetic variant seen in some people with autism — show a range of symptoms, such as repetitive behaviors and a lack of interest in new objects. But researchers have struggled to spot social deficits, a core symptom of autism1.

A new study homes in on ultrasonic vocalizations, the high-pitched squeaks that mice emit in a range of social situations. Male mice missing a copy of the 16p11.2 chromosomal region are less likely than controls to vocalize during encounters with normal female mice, the researchers reported 7 February in Autism Research2. They presented preliminary results from this study at the 2014 Society for Neuroscience annual meeting in Washington, D.C.

“We know that basic social behavior and same-sex social interactions are perfectly fine in these animals,” says lead researcher Mu Yang, assistant professor of psychiatry and behavioral sciences at the University of California, Davis.

But when the researchers arranged opposite-sex encounters and measured vocalizations, the social abnormalities appeared. “The deletion mice seem to have deficits in sensing and in responding to social cues,” says Yang.

The study is among a flurry of papers over the past few years that explore the effects of variants in 16p11.2 — a 600-kilobase stretch of DNA that encompasses 29 genes. About 1 percent of children with autism have either a deletion or a duplication in this region, which is also associated with epilepsy, schizophrenia, and speech and developmental delays.

Deletions and duplications in 16p11.2 are emerging as a hot area of research, particularly as scientists have come to understand that there is no one ‘autism gene’ but rather a large array of rare genetic variants that seem to increase risk for the disorder.

“There’s an increasing recognition that autism has many, many genetic bases and yet as many as 1 percent of cases of autism are associated with this particular deletion,” says Timothy Roberts,Oberkircher Family Chair in Pediatric Radiology at the Children’s Hospital of Philadelphia, who has documented abnormalities in brain size, structure and activity in children with 16p11.2 deletions. “This is the most conspicuous area of the genome for its association with autism.”

The new findings help to more fully characterize the effects of variants in this region and to solidify mice with a deletion in the region as a model for autism.

“We have had some pushback in terms of, ‘Is this really an autism model?’ since no one has been able to show any other sociability deficits in these animals,” says Gary Landreth, professor of neurosciences at Case Western Reserve University in Cleveland, Ohio, who was not involved in the study. That the researchers were able to pick out this behavior “is quite impressive,” he says.

The researchers developed a three-part test to study vocalizations. In the first phase, they introduced male mice to an unfamiliar control female. In the second, they briefly removed the female from the cage and then, during the third, returned her to the cage. The researchers recorded the vocalizations of two cohorts of males with a 16p11.2 deletion and a group of control males throughout all three phases.

Male mice with a 16p11.2 deletion made significantly fewer calls than controls did when they were first introduced to the female mouse. They also tended to vocalize less when the female was removed, though this difference was only significant in one cohort of mice.

The mutant mice also emitted fewer calls than the controls when sniffing a cotton swab soaked in the urine of female mice. And pups with the deletion vocalized less than control pups when removed from their nests.

The findings fit with a paper published last year in which the same team reported that mice with a 16p11.2 deletion have abnormalities in the striatum — a brain region involved in reward and motivation — says Joseph Dougherty, assistant professor of genetics and psychiatry at Washington University in St. Louis.

The changes in the striatum might be lowering the rodents’ drive to engage in social communication, says Dougherty, who was not involved in the study. “You can start to take some informed guesses as to what the circuits are in the brain that are mediating some of the behaviors,” he says. “They start to tell a very interesting story about what this deletioncan do to a mammalian brain.”

Yang and her colleagues also discovered several sensory abnormalities in the mutant mice: For instance, the animals have an unusually high tolerance for pain and are completely deaf. Some individuals with autism also report altered sensory sensitivities, including a lowered sensitivity to pain.

In the past few years, scientists have created two mouse models of the 16p11.2 deletion, a sign of the region’s importance in autism.

“As soon as people could lay their hands on those, they started working on them,” Landreth says. “This first wave of papers is a direct reflection of the availability of a brand-new, really important mouse model.”

In astudy published in The Journal of Neuroscience on 18 February, Landreth and his colleagues reported memory problems and anxiety-like behaviors in the second line of 16p11.2 deletion mice3.These mice also show differences in how they make new neurons, which in turn alters the structure of their brains.

“They have too many cells at the bottom of the cortex and too few cells at the top of the cortex,” Landreth says. “The logical connection is that this would have an impact on higher-order function like behavior and sociability.”

Researchers are also evaluating how 16p11.2 variations manifest in people. A study by Roberts and his colleagues published 11 February in Cerebral Cortex concludes that children with 16p11.2 deletions, but not duplications, exhibit significant delays in auditory processing4.

Taken together, the studies reveal how scientists are steadily deciphering the effects of mutations in this mysterious region. “Suddenly the human genetics of autism has started to have some strong and compelling findings for a series of rare variations,” says Dougherty. “16p11.2 is really the harbinger of that movement.”