Study supports use of eye tracking to study monkey behavior 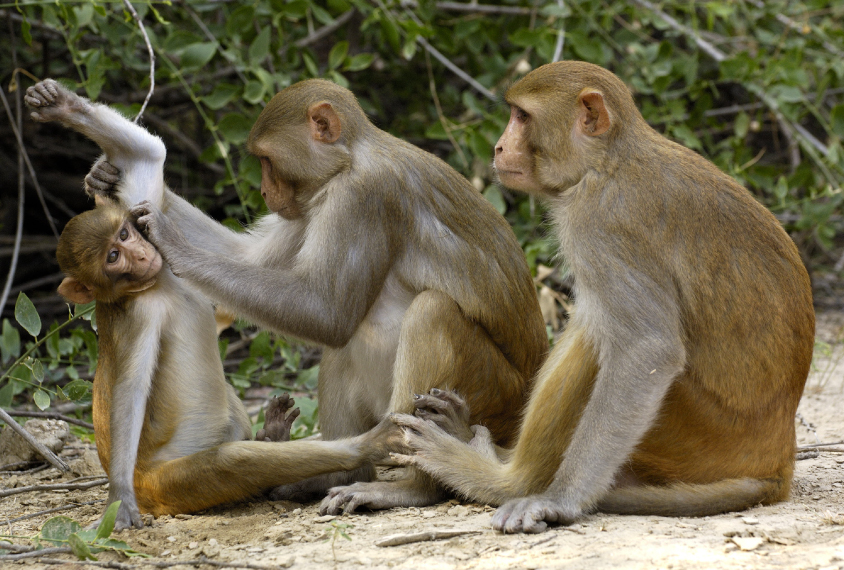 Monkey do: As with human babies, rhesus macaques’ social interest increases as they get older.

Rhesus macaques that are drawn to other monkeys’ faces in videos also tend to be highly social with their peers. The findings suggest that eye tracking is an effective way to measure a monkey’s level of social interest.

Eye-tracking studies have shown that children with autism pay less attention to faces in videos than their typical peers do. The new work shows that the method may also reveal traits of autism in monkeys, says Amy Ryan, a postdoctoral associate in Melissa Bauman’s lab at the University of California, Davis.

“We don’t know as much about eye tracking in monkeys as we do in people,” Ryan says. “What we’re doing here is comparing eye tracking to other, more established social-behavior measures we have for monkeys.”

The researchers followed 14 monkeys from birth to 2 years of age. The monkeys are housed at the National Primate Research Center in Davis, California, and are part of a long-term study on development.

The team placed all 14 monkeys, and their four mothers, in a large cage for three hours a day until the monkeys turned 6 months old. They watched each monkey every day for five minutes at a time and scored how often it initiated social interactions with its mother or peers. They also performed eye tracking on each monkey eight times between birth and age 2.

For the eye-tracking experiments, the researchers used a set of videos developed at the same institute. Two of the videos show a split screen with a monkey on one side and, on the other, either a bouncing ball or a clip from a nature video that includes neither a monkey nor a predator. Other videos feature close-ups of other monkeys’ faces or a loop of a mother monkey nursing her baby.

The team previously tracked monkeys’ interest in these videos by restraining the animals’ heads in a helmet. This time, they used a box with a peephole through which the monkeys see a computer screen; the screen detects light reflected from the monkeys’ eyes.

Using a box allows the researchers to interfere with the monkeys as little as possible, Ryan says. The animals can choose whether to look through the hole or turn away.

“It seems to be as pure a measure of their willingness to look as we can get,” she says.

Overall, the monkeys show more interest in social aspects of the videos as they get older, the researchers found. This interest peaks at 6 months of age. Preliminary data also hint that the monkeys’ interest stabilizes between 6 months and 2 years.

Preliminary eye-tracking data from another set of macaques, reported at the same conference last year, also suggests that monkeys show increasing social interest in the first 21 weeks of their lives. And human infants show the same trend.

The researchers divided the monkeys into two equal groups based on whether they look at faces more or less than the group average. The monkeys that show the most interest in faces also initiate the most social interactions with peers, the team found. By contrast, the monkeys in each group tend to initiate the same number of contacts with their mothers.