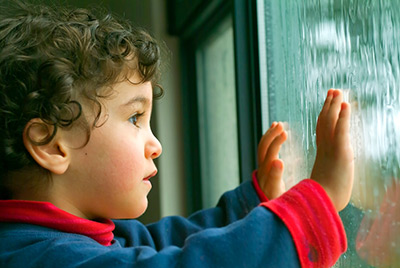 Toddler traits: Children who are later diagnosed with autism often show early symptoms such as a lack of interest in others.

A widely used screen for autism identifies only one-third of children at 18 months who are later diagnosed with the disorder, reports a large Norwegian study published 18 February in Paediatric and Perinatal Epidemiology1.

The 23-question Modified Checklist for Autism in Toddlers (M-CHAT), typically filled out by parents during routine visits to a pediatrician, also incorrectly flagged about 7 percent of children who do not have the disorder.

The findings suggest that the M-CHAT is not useful for identifying autism in 18-month-old children.

“It contributes to the debate about the public health benefit of population screening at an early age for autism spectrum disorders,” says lead investigator Camilla Stoltenberg, director-general of the Norwegian Institute of Public Health.

Recognizing symptoms of autism at an early age would help doctors direct children to the help they need. It could also help researchers understand how the disorder develops over time.

It may be more efficient to screen children for the symptoms at 24 or 36 months or to limit screening to children at high risk of autism, such as baby siblings of children with the disorder or those who have broad developmental delays, Stoltenberg says.

Still, the M-CHAT successfully identified several dozen 18-month-old children with autism, who can then benefit from early intervention, says Diana Robins, associate professor of psychology at Georgia State University. Robins helped developed the M-CHAT and was not involved in the study. “But I agree with [the researchers’] caution that you should not assume that a negative screen at 18 months means you’re free and clear forever.”

The M-CHAT is not considered a formal evaluation for autism, but rather an early screen for symptoms of the disorder, such as a lack of eye contact. Doctors either follow up with children who score above a certain threshold or refer them to a specialist.

The American Academy of Pediatrics recommends that all children be screened for autism at 18 and 24 months of age2.

In the new study, the researchers examined M-CHAT scores of more than 52,000 children born between 2003 and 2008 in the Norwegian Mother and Child Cohort Study. They identified 173 children with a diagnosis of autism based on medical records. Some of the children were only 4 years old at the study’s end and may be diagnosed with autism at a later age.

Given the new findings, universal screening may not be an efficient strategy, says Johnny Matson, professor of psychology at Louisiana State University, who was not involved in the study.

“I see no purpose in screening every single child,” Matson says. “As a result of that, you end up with a study like this in which they assess 52,000 kids, but only 173 of them have autism spectrum disorder. That’s a colossal waste of resources.” Matson developed BISCUIT, an autism assessment for children identified as ‘at risk’ for the disorder by their pediatricians.

The U.K. has not recommended population screening for autism, in part because of the lack of evidence for nationwide screening’s usefulness, Stoltenberg adds.

For instance, the M-CHAT is not designed to detect Asperger syndrome or pervasive developmental disorder-not otherwise specified (PDD-NOS), mild forms of autism.

The researchers relied on the fourth edition of the Diagnostic and Statistical Manual of Mental Disorders, the American Psychiatric Association’s guidelines for diagnosis. Both Asperger syndrome and PDD-NOS have been incorporated into the autism diagnosis in the DSM-5, the newest version of the manual.

Although the M-CHAT picked up 47 cases of classic autism, it did less well with these two conditions: It identified 18 of 68 children with PDD-NOS and 4 of 26 children with Asperger syndrome. It also incorrectly tagged 3,804 children in the study, or 7 percent, as having autism.

Many social and behavioral skills are still emerging at 18 months, suggesting that is too early an age for a screen to recognize mild symptoms of autism, the researchers say. Matson also adds that children with regressive autism typically begin to lose skills, such as speech, at an average age of 21 months.

But Robins contests the idea that social behaviors, such as a shared focus on an object, are not apparent at 18 months. “If the skill were still emerging, I would expect more parents to endorse that their kids are not doing those skills yet,” she says.

The researchers suggest that one way to improve the screen is to offer parents multiple-choice questions that list concrete behaviors. A new version of the M-CHAT, introduced earlier this year, follows the yes-or-no format but gives more examples of problem behaviors, Robins says.

For instance, when asking whether the child copies the caregiver, the revised screen cites examples of waving goodbye, clapping or making funny noises.

At 20 questions, the new screen is also a little shorter. Robins and her colleagues are working on an electronic version of the revised M-CHAT that will allow parents to complete the checklist in about ten minutes.

Ultimately, experts note, no tool is likely to identify all at-risk children at 18 months of age.