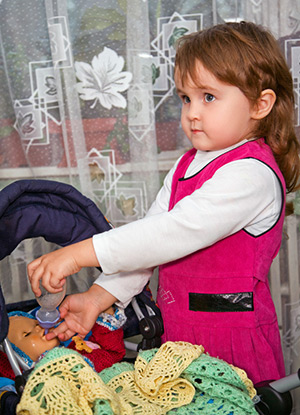 Head start: The new version asks parents 20 questions about their children, such as whether they play make-believe games with their toys.

An updated version of a test that detects autism symptoms in toddlers is shorter, simpler and more accurate than its predecessor, making it easier for pediatricians to identify children in need of further testing, reports a study published in the January issue of Pediatrics1.

The new version of the Modified Checklist for Autism in Toddlers (M-CHAT) has fewer questions than the previous edition, is worded more clearly and has a more straightforward scoring system.

In the first part of the improved two-step screen, caregivers answer 20 yes-or-no questions about their child’s development, such as, “When you smile at your child, does he or she smile back at you?” Answering “no” to three or more questions triggers a follow-up interview with the doctor.

“We designed it so that you could do it all in one visit,” says lead investigator Diana Robins, associate professor of psychology at Georgia State University.

The doctor would refer children who score high on the follow-up to a specialist who formally assesses them for autism. Toddlers flagged as being at risk for autism on both sections of the test are 114 times more likely than those who get a negative result to be later diagnosed with the disorder, the study says.

The original test was developed in the early 1990sin the U.K. and is used around the world to detect signs of autism in children between 16 and 30 months of age2, 3.

“I’m a fan of the M-CHAT,” says Wendy Stone, professor of psychology at the University of Washington, who was not involved in the study. “I think it’s the best measure that we have right now in terms of its ease of use in pediatric practices.”

Robins and her colleagues modified the test for use in the U.S. in 19994 and have continued to collect data about its validity as the screen gained popularity5. The study examined the new version’s effectiveness in 16,071 toddlers in Georgia and Connecticut screened for autism at routine 18- and 24-month doctor visits.

Children who scored a 3 or higher on the parent questionnaire and at least a 2 on the follow-up interview have about a 50 percent risk of being diagnosed with autism spectrum disorder and a nearly 95 percent risk of having a developmental delay.

The latter result is useful, but doctors shouldn’t rely on the test for screening mild problems such as minor language delays or slight intellectual disability, the researchers say. They recommend that doctors use other screens, such as the Parents’ Evaluation of Developmental Status test, instead.

In order to improve the test’s accuracy for detecting autism, the researchers modified a number of features in the original version, including simplifying the questions’ wording.

For example, some American parents with limited education had trouble understanding the British phrasing used in the test, Robins says. “‘Does your child take an interest?’ is more complex syntax than ‘Is your child interested?'”

She and her colleagues deleted three questions from the screen, including whether the child enjoys playing peek-a-boo, a phrase that is particularly difficult to translate into other languages.

They also added more examples to the test. For instance, many toddlers don’t ask strangers to play at the playground — a behavior more typical of 4-year-olds — but their parents may mistakenly report that their children are not social.

The new version clarifies the question with age-appropriate examples, including asking whether the child watches other children, smiles at them or approaches them.

“By making the questions clearer, you’re getting a better likelihood that the parent did understand that what they’re reporting to you is a real problem,” says Frances Page Glascoe, adjunct professor of pediatrics at Vanderbilt University in Nashville, Tennessee, who was not involved in the study.

Simplifying the test in these ways may have helped turn up more cases of autism. The new version suggests an autism prevalence of 0.67 percent, compared with 0.45 percent using the old screen. The U.S. average of 1.1 percent is even higher, perhaps because older children are more easily diagnosed than are toddlers.

“Some symptoms don’t become evident very early on,” Stone says. “Not everybody who is going to have autism is identified at 18 months.”

The screen also has a new scoring system. The researchers now count all questions equally, and toddlers who receive an 8 or higher skip the interview and go straight to specialists for evaluation.

“I think it’s great that they made the scoring easier,” says Angela Scarpa, director of the Virginia Institute of Technology’s Center for Autism Research, who was not involved in the study. “That will make it much easier for people to understand whether or not they need further evaluation and [will] identify their risk as low, medium or high.”

There is a notoriously long wait for children to receive an autism diagnosis, and a high score signals that parents may want to start interventions immediately.

“We don’t want kids waiting for a diagnosis without treatment,” Glascoe says. “If we do find out they have an autism diagnosis, we know the treatment will be different, but they’re still getting some basic services while they wait on a 9-to-12-month waiting list for the autism diagnosis.”

The new version also cut down the number of children without autism who are referred for follow-up from 9 percent to 7 percent. Of this, about 2 percent need further evaluation by a specialist.

“We didn’t have that degree of confidence in the old version because there was a higher false-positive rate mixed in,” Robins says.

However, the new test may be erring too much on the side of caution. Using more thorough evaluations, the researchers identified 18 cases of autism among children who didn’t score high enough on the first part to merit a doctor’s follow-up.

The American Academy of Pediatrics recommends that doctors not only use screens but also look for warning signs of autism in their young patients6, a policy the new study heeded.

“The combination of screening and surveillance was extremely powerful for early detection,” Robins says. “The kids were detected an average of two years under than the national median age of detection,” which is 4 years of age.

Robins and her colleagues plan to track the children in a few years to determine whether they missed any other children who have autism.