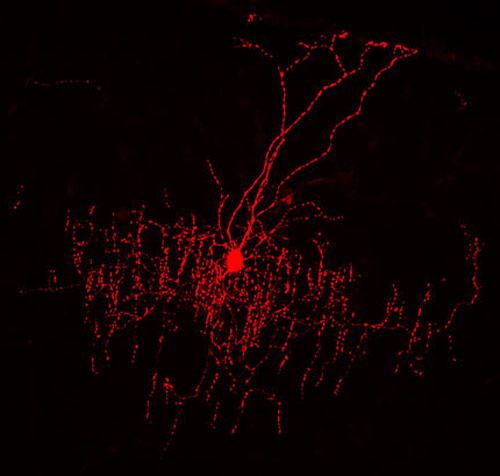 Chandelier cells, a powerful type of interneuron — cells that dampen electrical signaling in the brain — could help unravel the disrupted brain wiring seen in people with autism, according to data presented yesterday at the Wiring the Brain meeting held outside Dublin, Ireland.

Chandelier cells have been implicated in several brain disorders, including epilepsy and schizophrenia. Neurobiologist Josh Huang presented new data suggesting that these cells are the last to develop in the cortex, the brain region involved in higher-order functions such as memory, attention, thought and language — many of which are affected in autism.

Research suggests that autism may result from faulty wiring in the brain, and from an imbalance between neuronal excitation and inhibition. Studies of mice have found defects in certain types of interneurons that help maintain the balance.

Because chandelier cells play an important role in inhibition — with new data indicating that they may sometimes serve an excitatory function as well — tracing their activity could help scientists understand the importance of the balance in autism and other diseases.

“There’s a great deal of evidence that inhibitory neurons are of particular importance in autism,” says Christopher Walsh, chief of the division of genetics at Children’s Hospital, Boston, who was not involved with the work.

“With this concept that inhibitory and excitatory balance might be off in autism,” Walsh says, “the ability to label specific subsets of interneurons allows us to disentangle some of this complexity.”

First discovered in the 1970s and studied by DNA pioneer Francis Crick, among others, chandelier cells are rare, comprising less than one percent of neurons in the brain.

Chandelier cells connect only with pyramidal cells — excitatory neurons that appear early in development — damping down their activity. “They grab the throat of pyramidal neurons,” says Huang. “They are very powerful.”

Part of the reason chandelier cells exert such a strong influence despite their low numbers is because they are concentrated in brain regions — the cortex, hippocampus and amygdala — involved in higher-order brain functions.

In experiments with mice, Huang used a technique called gene fate mapping, using an enzyme called CRE to switch on a subset of interneurons that regulate the timing of brain development.

This subset of interneurons all produce gamma-aminobutyric acid — GABA for short — but are highly diverse. Each type of GABA-producing cell performs a specific function at a specific time, creating circuits that underlie the functions of the cortex.

Huang’s approach generated all the major classes of GABAergic neurons, most of them early in development.

“But very late, almost too late, it generated chandelier cells,” says Huang. “Many people believe that the generation of GABA neurons in rodents always occurs in the early embryonic stage, but the chandelier cells appeared close to birth.”

Strikingly, he found, chandelier cells are heavily overproduced at first. “They are overgrown massively, then pruned massively,” says Huang. Between the second and third postnatal week, he says, there is almost a three-fold reduction in cell numbers.

The early overproduction and subsequent pruning of chandelier cells is reminiscent of abnormalities observed in the cortex of people with autism, whose brains expand too fast in the first two years of life and then begin to shrink.

Using fluorescent labeling and a technique called optogenetics — which allows scientists to stimulate neurons to fire using light — Huang is tracing the activity of the cells in the brain of live mice.

“We should know in a month or two just what they are doing,” Huang says — a particularly exciting prospect, as new data indicate that chandelier cells sometimes appear to excite pyramidal neurons, rather than calm them.

“This is kind of viewed as heresy,” Huang says. If chandelier cells are exciting pyramidal neurons, he says, “they will also be the most powerful excitatory neurons because they are exciting [them] exactly where the action potential is.”