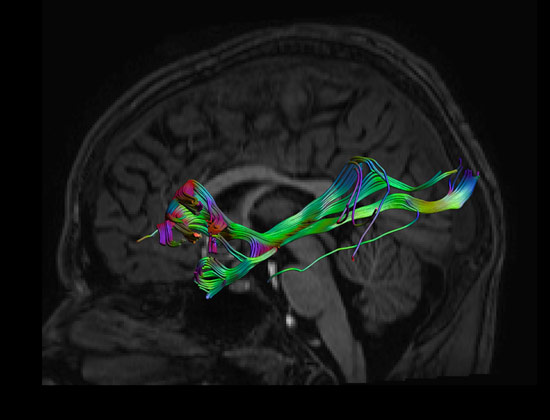 White’s anatomy: Diffusion tensor imaging &mdash; which traces the flow of water molecules through the brain &mdash; shows abnormalities in white matter in the brains of people with autism compared with controls.

White’s anatomy: Diffusion tensor imaging — which traces the flow of water molecules through the brain — shows abnormalities in white matter in the brains of people with autism compared with controls.

People with autism show a clear advantage in a task that requires them to imagine rotating an object in space, according to results presented Friday in a poster session at the Wiring the Brain meeting held outside Dublin, Ireland.

However, imaging results suggest that this advantage may be the result of structural and functional abnormalities in brain connectivity in those individuals.

In the study, researchers scanned the brains of 22 young adults with high-functioning autism and 22 typical controls matched for age and IQ as they looked at two sets of L-shaped objects on a black background.

In both sets of images, two objects are aligned side by side at odd angles to each other — 20 or 60 or 100 degrees askew. The researchers asked study participants to identify which set of objects are the same and which are mirror images of each other. To do so, participants have to mentally rotate the objects in space so that they are perfectly aligned.

The control group, by contrast, shows much greater brain activation in these areas during the task, indicating a higher degree of functional connectivity between the different regions.

Meanwhile, diffusion tensor imaging — which traces the flow of water molecules through the brain — shows significant abnormalities in the white matter of the caudate nucleus in the autism group.

“It’s possible that the abnormal brain activity in the autism group is secondary to this anatomical abnormality,” says Jane McGrath, a postdoctoral fellow in the laboratory of Louise Gallagher, director of the Autism Research Group at Trinity College in Dublin.

The study is part of an ongoing project at the school investigating cortical connectivity in individuals with autism.