Small deletions, duplications of DNA may up autism risk 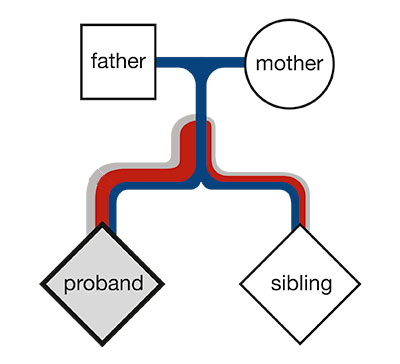 Two new studies have found more small deletions and duplications of DNA in individuals with autism than in controls. These variants may also affect the severity of the disorder.

The studies mined the sequences of exomes, the regions of the genome that code for proteins.

Autism is strongly genetic: Twin studies have estimated that some 50 to 90 percent of cases are caused by genetic factors. Yet all of the genetic studies of autism put together have identified less than half of these genes.

The new studies suggest that some of that missing heritability can be explained by small deletions and duplications of DNA — called copy number variations (CNVs).

“Now that there’s exome data on a substantial number of autism families, you can take advantage of the ability to detect CNVs in exons to find stuff that you couldn’t find before,” notes Jonathan Sebat, associate professor of psychiatry at the University of California, San Diego, who was not involved in either study.

In the first study, published 3 October in the American Journal of Human Genetics, Joseph Buxbaum and his colleagues in the Autism Sequencing Consortium analyzed the exomes of 432 individuals with autism and 379 unaffected controls. They found significantly more small CNVs in the autism group than in the controls1.

In the other study, published 10 September in the same journal, Evan Eichler and his colleagues analyzed the exomes of 411 families in the Simons Simplex Collection2. The collection includes genetic and clinical information from nearly 3,000 families that have one child with autism and unaffected siblings and parents. (The collection is funded by SFARI.org’s parent organization.)

There are several kinds of genetic variation that increase a person’s risk of autism. Much of the field’s attention thus far has focused on larger CNVs and de novo, or spontaneous, mutations. The new studies show that small CNVs are also important.

“It’s really nice that the two papers show similar things,” says Buxbaum, director of the Seaver Autism Center at the Mount Sinai School of Medicine in New York. “The burden of small CNVs is really quite profound.”

Previous studies relied mostly on microarrays, which only detect CNVs longer than about 30 kilobases, which typically spans several genes.

The new studies, in contrast, use techniques that zero in on the stretches of the genome in and around genes3, 4.

The median size of all of the CNVs found in Eichler’s study is 18 kilobases. More than half of them would not have been discovered with microarrays, according to Eichler.

His team also uncovered a link between CNVs and autism severity. The researchers separated participating families into two groups based on the children’s scores on the Social Responsiveness Scale, or SRS, a questionnaire of autism symptoms completed by parents or teachers.

In the second group of 115 sibling pairs, the affected and unaffected siblings have similar SRS scores. These sibling groups tend to carry the same number of CNVs.

The findings bolster the notion that the CNVs confer autism risk. “It tightens up the results a lot when the genetic effect correlates with severity,” Sebat says. “That’s a good sign.”

They also fit broadly with what other groups have found for schizophrenia and bipolar disorder. “There are de novo mutations that contribute, and there are inherited mutations that also contribute,” Sebat says. “The story is very consistent across different disorders.”

Previous studies of CNVs in autism have hinted that inherited CNVs are more likely to be passed down from the mother than from the father. Eichler’s study found 136 CNVs that children with autism inherited from their mothers compared with 100 from their fathers.

Although this difference is not statistically significant, researchers find the sex bias intriguing. One explanation for the bias might be that men are more severely affected by autism-linked CNVs and are therefore less likely to reproduce. “But that’s only a model right now,” Eichler says.

Other researchers are excited about the risk contribution from small CNVs because they can be studied more easily than larger variants.

“While most of us have been finding large CNVs, which usually have dozens of genes, the small CNVs give the opportunity to pinpoint single genes,” notes Eric Morrow, assistant professor of molecular biology at Brown University in Providence, Rhode Island, who was not involved in either study.

Eichler and his colleagues found a long list of genes that the small CNVs affect. One of these, ORC3, has never been associated with autism before, but is disrupted in two of the children with autism. It encodes a DNA-binding protein and has been linked to learning and memory in fruit flies5. “It was one of our top hits,” Eichler says.

In Buxbaum’s study, two-thirds of the CNVs found in individuals with autism affect a single gene.

Using software that analyzes gene pathways, Buxbaum and his colleagues found that these genes cluster into two categories: those involved in autophagy — the process by which a cell recycles damaged or unnecessary parts — and those that code for pieces of the cell’s scaffolding.

The findings on autophagy are particularly intriguing, Buxbaum says, because most studies have focused on its role in neurodegeneration and brain injury. “But there’s more and more evidence that it almost certainly plays a role in development,” he says.

In early life, the brain makes an abundance of synapses — the junctions between neurons — and then prunes away the ones that aren’t used. And this pruning process is regulated in part by autophagy, Buxbaum says.

The numbers in both studies are too small to confirm any of the candidates as a strong autism risk gene. Those relationships may become clearer as more families have their genomes sequenced, the researchers say.