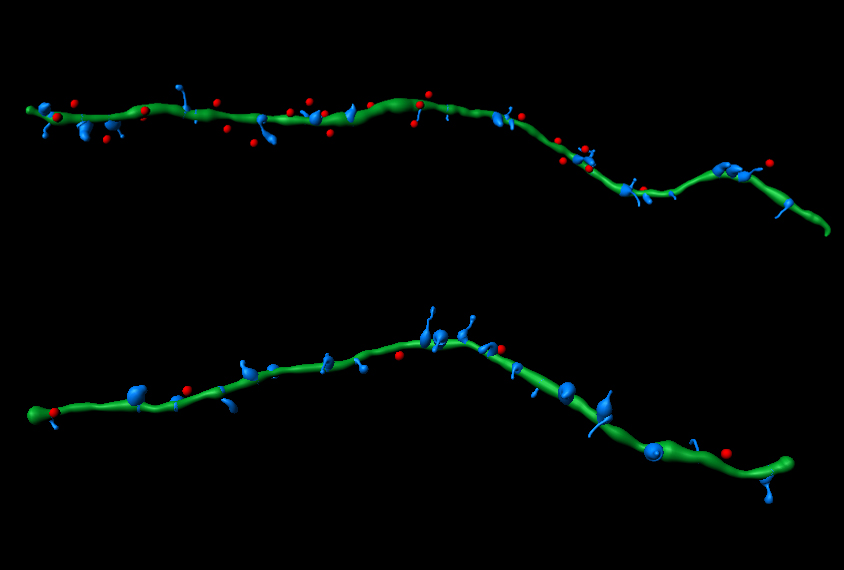 Mice missing a copy of CHD8, a top autism gene, show a signaling imbalance in their brains — a finding in line with a popular hypothesis about autism’s origins.

Neurons in deep layers of the mice’s cortex receive too many inhibitory signals and too few excitatory ones, the team reported.

The excess inhibition may stymie the brain’s ability to send information to other brain areas.

“It would affect how the brain responds to external stimuli — taking in new information and responding in the right way to it would be altered,” says Rob Ellingford, a graduate student in Laura Andreae’s lab who presented the work.

The mice also struggle to make up for this skewed signaling.

“Their ability to compensate for changes to the imbalance are impaired, and may even be maladaptive,” says Andreae, senior lecturer at King’s College London.

The team analyzed slices of brain tissue from mice missing a single copy of CHD8. They studied slices from mice of a variety of developmental stages: newborn, juvenile, adolescent and adult.

They eavesdropped on the signals received by excitatory neurons in deep layers of the prefrontal cortex, a brain region implicated in autism. They found nothing unusual in the brains of newborn and adult mutant mice.

The neurons do not differ from controls in their firing patterns or excitability, or in the number of branches that receive signals. But they do have more inhibitory connections than the controls, which may explain why they are especially attuned to inhibitory signals.

“This tells us that reduced CHD8 levels act differently on excitatory and inhibitory synapses,” Ellingford says.

The team confirmed this by analyzing mouse brain slices from which they had selectively removed a copy of CHD8 from either excitatory or inhibitory neurons.

As a final test, they incubated the brain slices in a solution containing drugs that dampen signaling.

To compensate, brain slices from control mice ramp up their ability to receive excitatory signals — a phenomenon called homeostatic plasticity.

However, the brain slices from mice missing a copy of CHD8 do not show this compensatory change. In fact, they do the opposite: They scale up their ability to receive inhibitory signals.

“It seems they’re showing a blunted ability to respond in the way that you’d want to, and also showing an inappropriate response,” Ellingford says.