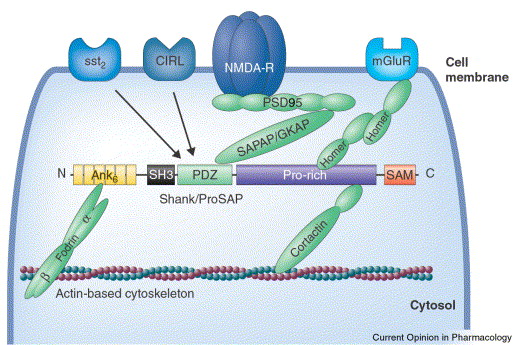 Domain name: Different segments of the SHANK3 protein interact with distinct proteins at the junctions between neurons.

Different mutations in the autism-linked SHANK3 gene lead to distinct glitches at the synapse, the junction between neurons, according to unpublished research presented Tuesday at the 2012 Society for Neuroscience annual meeting in New Orleans.

The researchers arrived at the results by systematically comparing two SHANK3 models, each made by disrupting a different segment, or domain, of the protein.

SHANK3 variations account for just under one percent of autism cases, making it one of the strongest risk genes for the disorder. The first SHANK3 mutant mouse debuted in late 2010, and three others followed over the next year.

Each of the models mutates a different part of the protein. Some disrupt just one copy of SHANK3; others mutate both copies. The studies also focused on different regions of the brain.

“The problem is that comparing them all is kind of like comparing apples and oranges,” says Haley Speed, a postdoctoral fellow in Craig Powell’s lab at the University of Texas Southwestern in Dallas.

One of the two models Speed analyzed disrupts the ‘ankyrin repeat’ region near the front of the gene. The other model has an impaired binding domain for HOMER, another autism candidate that helps support the synapse. (The latter will be referred to as the HOMER model for the purposes of this article.)

This kind of rigorous comparative work may be “less sexy” than making new mouse models, but “it’s very organized, and it’s clinically minded,” says Andrew Mitz, a staff scientist at the National Institute of Mental Health, who was not involved in the work.

Each domain of the protein has a different role at the synapse, allowing SHANK3 to interact with a variety of receptors, such as the NMDA, AMPA and mGluR receptors. All of these rely on signaling of the neurotransmitter glutamate, which is an important pharmacological target for fragile X syndrome.

The SHANK3 domains are also important for the protein’s interactions with other synaptic proteins, such as HOMER and PSD95, which have also been tied to autism.

The researchers first analyzed long-term potentiation (LTP), an electrical signal that marks the creation of a strong connection between neurons and is a hallmark of learning.

The models are different, however, in long-term depression (LTD), which serves as a marker of activity at the mGluR receptors.

The ankyrin mutants, whether missing one copy or two, show abnormal LTD. Mouse models of autism-related fragile X syndrome have the same characteristic. In contrast, neither version of the HOMER model mice shows significant LTD irregularities.

By measuring various currents produced by the cell, the researchers also calculated the ratio of NMDA to AMPA receptors. An abnormal ratio could explain the LTD differences seen in both SHANK3 models.

The findings suggest that different biological mechanisms underlie the learning defects in each model.

The researchers have also begun preliminary testing of social and learning behaviors. “We can’t give it away just yet, but there are definitely differences,” Speed says.

The differences may have important implications for drug development. For example, given the data on the NMDA-to-AMPA ratios, people carrying the HOMER-binding mutation in SHANK3 might benefit from drugs targeting NMDA receptors, whereas those with ankyrin repeat mutations might not.

These sorts of studies may help scientists better understand the diverse symptoms of people with Phelan-McDermid syndrome, who lack a segment of chromosome 22 that often includes SHANK3, Mitz adds. “I don’t think there’s been enough information farmed yet from the human population.”

Editor’s note: Virginia Hughes has co-authored a review on synaptic abnormalities, including in SHANK3, with Morgan Sheng and Huda Zoghbi.