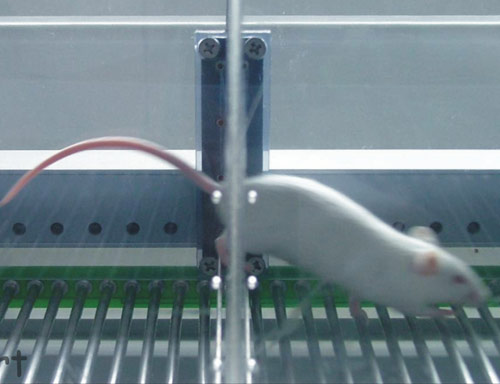 Jumpy mice: Animals are trained to jump across a partition upon hearing a high tone and to stay put at the sound of a low one, modeling the ability to integrate auditory and motor information.

Mice with mutations in a gene tied to language impairment and to autism have trouble learning to associate sounds with motor patterns, says a study published last week in PLoS ONE1.

The work lends further support to the idea that the gene, FOXP2, plays a crucial role in language learning. It also provides a new mouse model for investigating the genetic and molecular underpinnings of tasks that mirror a type of learning that likely takes place when humans acquire the ability to speak.

The study represents “an elegant use of mouse genetics to replicate known human mutations in a speech-related gene — but to investigate deficits appropriate to a mouse,” says Stephanie White, associate professor of integrative biology and physiology at the University of California, Los Angeles, who did not participate in the research.

Scientists first made the link between FOXP2 and language more than a decade ago, when the gene was discovered to underlie the severe pervasive language impairments that affected members of a London family dubbed KE2. Since then, studies have begun to identify its function in establishing neural connections during early stages of brain development, including those involved in motor coordination, acquisition of motor skills and the ability to integrate sensory and motor information.

No mutations in the gene-coding region of FOXP2 have been directly linked to autism, but the gene appears to regulate other genes, such as CNTNAP2 and MET, which have been associated with the disorder.

In the current study, researchers examined two strains of mice, each genetically engineered to carry a different FOXP2mutation found in humans. One strain carried the genetic glitch identified in the KE family, which produces an error in a segment of the FOXP2 protein that binds to DNA. These individuals have difficulty learning to produce the vocal movements needed for speech, as well as extensive other language deficits. The mutation in the second strain, which leads to a shortened version of the protein that disrupts its function altogether, was identified in another family with even more severe language deficits3.

The researchers also used a behavioral paradigm that offers a way to study a more complex aspect of language-related learning in mice than previously possible.

Acquiring language requires being able to differentiate sounds, and using this knowledge to produce those sounds for speech, says Günter Ehret, professor of neurobiology at the University of Ulm in Germany and the study’s senior scientist. “Of course, mice cannot speak, but we can couple their ability to perceive tones to some motor acts that the mice have to perform.”

Ehret and his colleagues had previously developed a way to study this coupling using a device called a shuttlebox, in which two chambers are divided by a partition that a mouse can easily jump over4. They trained the mice to jump across the partition when they hear a high tone, but to stay put at the sound of a low one.

The task requires two different learning processes. First, the animals must figure out how to jump over the partition; then they have to associate each tone with the correct motor response in order to accomplish the task. “We can discriminate between these two phases of learning,” says Ehret.

In the present work, control animals quickly learned the first step, taking five or six jumps back and forth over the hurdle within the first two days of training. Both mutant strains of mice, however, took two days to get the hang of it, suggesting they may have some motor-learning deficits, the researchers say.

The mutant mice had even more trouble mastering the auditory-motor association. Though the control animals learned the second phase of the test in two days, it took the KE mice more than two weeks to grasp it. Animals from the other mutant strain never achieved the same level of proficiency as controls.

“We had previously shown that such mice have impairments in learning of motor skills, but we did not have a way to look at auditory-association learning,” says Simon Fisher, director of the Max Planck Institute for Psycholinguistics in the Netherlands and an author on the study. The findings suggest that the mutations don’t just interfere with learning motor skills, but also impede the ability to integrate auditory and motor information, he says.

The two mutations caused deficits of differing severity, which “is also intriguing,” says Fisher, “although we do not yet understand the precise mechanisms that underlie these differences.”

Past behavioral mouse studies of language-related genes have employed motor tasks such as the Morris water maze or investigated other behaviors, such as ultrasonic vocalizations — high-pitched squeaks that are inaudible to humans. A recent study from Daniel Geschwind’s lab at the University of California, Los Angeles, found that CNTNAP2-deficient mice that are separated from their mothers do not produce the ultrasonic sounds that their control littermates do, suggesting they have communication deficits reminiscent of autism.

It’s not clear whether the distinct deficits seen in the two mutant strains of mice in the new study correlate with differences in language problems in humans with the disorder.

Fisher, who was a member of the team that first identified the FOXP2 mutation in humans2, is now conducting gene sequencing studies in people with severe language deficits to find other potentially causal mutations in FOXP2 or in related genes. “Then we might be able to make systematic comparisons between different mutation types,” he says.

Fisher notes, too, that the findings don’t directly apply to autism because people with these mutations do not have other characteristics of the disorder. “On the other hand, there is at least an indirect connection” because FOXP2 interacts with some autism-related genes, he adds. “So we are tapping into neurogenetic mechanisms that seem to bridge different neurodevelopmental conditions.”

Indeed, the fact that the mice from both mutant FOXP2 strains held back from jumping from one chamber to the other at the beginning of the experiment — a loss of exploratory behavior — “is one of the core symptoms of autism,” says Martin Poot, assistant professor of medical genetics at the University Medical Center Utrecht in the Netherlands, who was not involved in the study.

White and Poot say it would be interesting to test the CNTNAP2 mice using this new behavioral paradigm. It’s likely that “the combination of several genetic alterations may eventually provoke autism,” says Poot. “The novel behavioral paradigm of the paper may help us a lot to understand these complex interrelationships.”