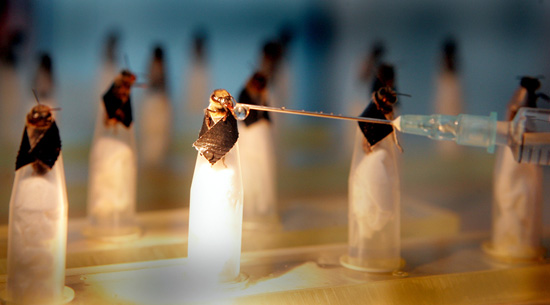 Smells good: When honeybees learn to associate an odor with sugar water (delivered by syringe, above), their brains surge with neurexin 1.

Several studies in the past year in people, mice and honeybees have tied autism to a protein that helps neurons communicate. Problems with the protein, neurexin 1, are associated with a wide range of autistic behaviors, such as impaired social interactions, anxiety and problems with learning and memory.

NRXN1 acts at the synapse, or junction between neurons. It binds with other synaptic proteins, called neuroligins, which have repeatedly been implicated in autism1.

“[NRXN1] is one of the most high-profile genes for autism at the moment,” says Arthur Beaudet, professor of molecular and human genetics at Baylor College of Medicine.

The new research links mutations in the gene to a wide range of autistic behaviors, such as impaired social interactions, anxiety and problems with learning and memory. This diversity suggests that a single defect in NRXN1 could give rise to an array of developmental disorders.

In February, researchers from Baylor College of Medicine reported DNA deletions or duplications — called copy number variations (CNVs) — in NRXN1 in three families whose members have autism or exhibit a variety of autistic features, such as speech delay2.

NRXN1 pokes out of the cell membrane on the sending side of the synapse to bind with neuroligins located across the junction. Previous genetic screens of individuals with autism have found CNVs in the part of the gene that codes for the extracellular portion of the protein3,4,5,6.

The new study is the first to pinpoint CNVs — one deletion and two duplications — in the part of the gene encoding the intracellular region of the NRXN1 protein, including the part that spans the cell membrane.

Using a computer algorithm that models protein structure from DNA sequence, the scientists predict that these particular CNVs cause NRXN1 to encode an abnormally short protein, which probably disrupts its function at the synapse.

“Whether this means [the CNVs] are more pathogenic than the others found elsewhere is hard to say,” says lead investigator Pawel Stankiewicz, assistant professor of molecular and human genetics at Baylor.

NRXN1 first came to Stankiewicz’s attention a few years ago, when a colleague sent him a DNA sample from a woman with Asperger syndrome, anxiety and depression, who has several children with autism-like features. Testing her DNA with a microarray that targeted genes associated with a wide range of developmental disorders, Stankiewicz found a deletion in NRXN12.

“At that time, neurexin was not really known to be involved in autism,” he says.

Stankiewicz’s team then tested DNA samples from the woman’s five children. The four who display varying degrees of autism, anxiety and speech delay all inherited their mother’s 380 kilobase NRXN1 deletion. The remaining child, who does not have symptoms of autism, did not.

Stankiewicz then looked for other cases of NRXN1 abnormalities in a database maintained by Baylor’s Medical Genetics Laboratory. This database contains genetic testing results of 25,000 individuals from around the country.

The search turned up two other families carrying duplications — one spanning 180 kilobases and another 330 kilobases — within the NRXN1 gene. In both cases, the duplications only crop up in family members with autism, speech delay or excessive anxiety.

Stankiewicz and colleagues have since revised their microarray to target all of the protein-coding regions of NRXN1 and those of 1,699 other genes involved in developmental disorders. They uncovered NRXN1 CNVs in additional families with autism, he says. He expects to submit these results for publication sometime this year.

Although finding NRXN1 abnormalities in those with autism is not new, it’s exciting to see the diversity of psychiatric phenotypes stemming from the same abnormality, says Maja Bucan, professor of genetics at the University of Pennsylvania. “It’s important for us to keep this in mind when we do our studies so that we do not focus only on a particular disease,” Bucan says.

Last year, scanning 1,771 families with autism, she and her colleagues detected NRXN1 deletions in both affected and unaffected family members in 9 families; they did not find deletions or duplications in anyone from the 2,539 control families7.

This means that other genetic factors are likely to interact with NRXN1 abnormalities to produce the range of phenotypes seen in this study. “Even if we’ve identified a neurexin 1 deletion in a person, it’s important to ask ‘What else is there’?” Bucan says.

The worldwide effort to resequence entire human genomes aims to reveal the complete catalog of genetic anomalies that could increase a person’s susceptibility to a disorder, she adds.

More evidence for the complex synaptic interactions of NRXN1 comes from studies in the past year in mice and insects.

Mice engineered to lack one form of NRXN1 display some, but not all autism-like behaviors, according to one report published in October. The mutant animals show no social impairments or learning deficits, for instance, but do show increased repetitive behaviors, grooming themselves nearly twice as often as do control mice8.

The mutant mice show more obvious abnormalities in the brain. Electrical signals passing through synapses in the hippocampus, a region crucial for learning and memory, are weaker than those in control mice, making neuronal signaling less effective.

This defect occurs only in excitatory synapses, which promote signals between neurons. An imbalance of excitation and inhibition — signals that dampen electrical activity — has turned up in other mouse models of autism carrying neuroligin mutations9,10.

Meanwhile, insect studies of NRXN1 are revealing how the protein and the neuroligins it interacts with change during the development of synapses, which are crucial for learning.

In February, Australian scientists reported that levels of NRXN1 and neuroligin 1 (NLGN1) in honeybees change as the insects learn a new task11.

“The bee is the Rolls Royce of the insect world as far as neuroscience goes,” says lead investigator Charles Claudianos, a senior research fellow at the University of Queensland. With about one million neurons, the honeybee brain is extremely large for an insect. Like people, the honeybee is a quick learner with a huge memory capacity and lives in a highly structured society.

The neurexins and neuroligins found in honeybees are highly similar to those in vertebrates12, making the bee a good system to explore the fundamental ways that these molecules work.

In the study, the researchers trained bees to associate a certain smell with sugar water by repeatedly presenting the two together. Each time, the bees lap up sugar water delivered from a syringe with their tongue-like proboscises. Later, when presented with the smell alone, the bees stick out their proboscises in anticipation of the sugary treat — showing that they have learned the association.

The researchers found that compared with bees that did not learn the task, the brains of trained bees contain more than three times the molecular precursors for new NRXN1 and NLGN1 proteins.

Claudianos suspects that this reflects the creation of new synapses, which underlies learning in honeybees. This and other experiments in the new study showed that these synaptic proteins may help the bee learn from sensory experiences.

Mutations to these synaptic molecules, as found in autism, could restrict synaptic changes and impair learning in people, he says.