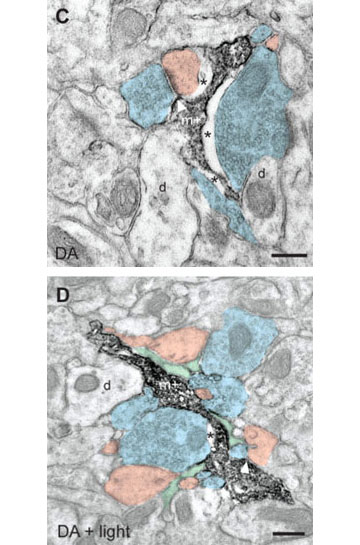 Pruning partners: After mice are left for days in the dark (top), their microglia (black) are more likely to engulf parts of the synapse (pink) than are those of mice re-exposed to light (above).

Scientists are changing their minds about the role of microglia, the brain’s strongest and most agile soldiers against damage and infection.

Microglia are versatile beyond the immune system, and could be important for neurological disorders, including autism, according to a study published 2 November in PLoS Biology1.

“Our work suggests that these cells are not just sitting around waiting for something horrible to happen to the brain. They’re actually doing important things all the time to help with brain function, and synaptic function in particular,” notes lead investigator Ania Majewska, assistant professor of neurobiology and anatomy at the University of Rochester in New York.

This influence on brain connectivity could explain why microglia keep popping up in studies of cognitive disorders ranging from Alzheimer’s and Parkinson’s diseases to Rett syndrome and autism. In 1990, Manuel Graeber, chair of brain tumor research at the University of Sydney in Australia, first proposed that microglia are the main component of the brain’s ‘immune network2.’ At the time, most people thought that the cells are usually at rest, dramatically changing shape in the presence of an infection and engulfing foreign particles.

In 2005, however, a German team discovered that the term ‘resting microglia’ is an oxymoron: the cells’ branches are in fact continually reaching out to their cellular neighbors — acting, as the researchers put it, like “busy and vigilant housekeepers3.”

“Their little processes are zipping away all over the place,” Majewska says. Her new study suggests that this activity is much more than an infection patrol.

Her team took close-up pictures and videos of microglia in the visual cortex of young mice. They chose this region partly because its activity can be probed simply by changing light conditions.

One method, called two-photon imaging, captures the interactions of cells in live mice. By genetically engineering the mice so that microglia glow yellow and neurons green, the researchers could watch the cells dancing together in real time.

Using electron microscopy — which gives a high-resolution picture of fixed tissue — the researchers found that microglia touch and wrap around several parts of the synapse. In animals that had been deprived of light for about a week, microglia are larger and have more of these interactions with the synaptic cleft, the tiny gap between two neurons.

What’s more, in mice exposed to darkness, microglia are more likely to have engulfed parts of the synapse, suggesting that the cells are helping the brain adapt by pruning unnecessary connections.

“This paper is a breakthrough in that it really demonstrates that microglia respond to experience,” Graeber says.

The findings align with a perspective he published 5 November in Science4, in which he proposed that, more than soldiers or housekeepers, microglia are like electricians: maintaining and installing electrical equipment from outside the circuit.

Microglia have been a hot topic in the autism field since 2005, when a group led by Carlos Pardo identified activated microglia and inflammation in postmortem brain tissue from children with autism5.

In August, Pardo and colleagues looked at the structure of microglia in much more detail. They again found an abundance of activated microglia in autistic brains, and showed that the cells are larger and denser6.

Because of microglia’s reputation as infection-fighters, these reports have fueled speculation that the immune system is disrupted in people with autism. But the new work shows that microglial shape-shifting happens all the time, and not necessarily as a marker of immune response.

“We still don’t have a good explanation for why microglia are activated in autism,” says Pardo, associate professor of neurology and pathology at Johns Hopkins University in Baltimore. “It could be because there is a protective factor, or it could be in response to synaptic abnormalities. We just don’t know.”

Clarifying the role of these cells in autism could lead to a new class of treatments. Because microglia operate independently of neurons, drugs might be targeted to microglia without affecting cell circuitry. “Microglia are more amenable to therapy than neurons,” notes Lee-Way Jin, associate professor of pathology at the M.I.N.D. Institute at the University of California, Davis.

For a study published earlier this year, Jin and collaborator Izumi Maezawa harvested microglia from healthy mice and those missing MeCP2, the gene that causes Rett syndrome. Looking in cultured cells, they found that in the presence of the mutant microglia, neurons grow with stunted dendrites, the long projections that receive electric signals7.

Jin is developing a drug that blocks a potassium channel that is specific to microglia. Targeting the channel might allow researchers to regulate the action of the microglia. “But we have to walk a fine line — we want to inhibit microglia activation, but also preserve its beneficial effects.”