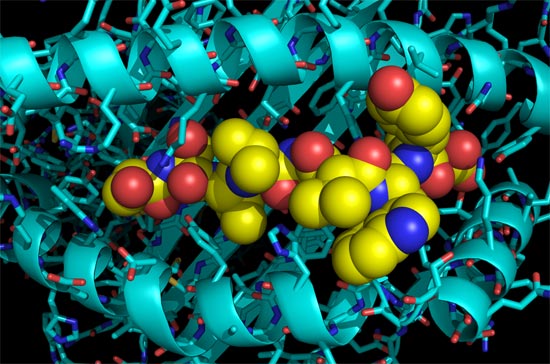 Potent proteins: Some people with schizophrenia carry common genetic variants in regions that code for molecules (above) crucial for healthy immune function.

Hundreds of common genetic variants may collectively, rather than individually, up the risk of schizophrenia. That’s one of the major findings of the largest genome-wide association analysis of the disorder, published online 1 July in Nature1,2,3.

Several of the variants lie in regions important for immune function and associated with autism. This suggests that both disorders stem partly from abnormal activation of the immune system, say some researchers.

Pinning down the genetic roots of psychiatric disorders has been much more complicated than researchers once anticipated, with large studies revealing both common and rare variations associated with disease.

For example, people with autism and those with schizophrenia tend to have more rare copy number variations — alterations in which a chunk of DNA is rearranged, deleted or duplicated — than do healthy people. In April, a large genome-wide association study was the first to identify a handful of common variants — carried by at least five percent of the general population — that crop up more frequently in people with autism than in controls4.

“The studies suggest that it’s not going to be so simple that we found all of the genes, and all of the remaining genes are rare variants,” says Aravinda Chakravarti, director of the Center for Complex Disease Genomics at the Johns Hopkins University School of Medicine, who was not involved with the new schizophrenia reports.

Reports from all three groups implicate hotspots within the major histocompatibility complex (MHC), a vast area of chromosome 6 that contains more than 100 genes responsible for, among other roles, immune function and gene expression. Some genetic evidence suggests a link between the MHC variants and autism5, but before this effort no such link had been found for schizophrenia.

“After all this data, and the shared copy number variation studies, we are thinking some more that the disorders might share some substantial susceptibility.”

The gene-dense MHC is associated with at least 100 different human diseases — more than any other genetic region. Yet scientists do not understand the structure and function of many of the proteins for which the region encodes.

Although the connection between MHC and psychiatric disease is unclear, the presence of variants on chromosome 6 in the new studies bolsters the supposed link, researchers say.

Before this, scientists had depended mostly on indirect evidence to tie schizophrenia to the MHC region. For example, children born to mothers who had the flu during pregnancy have a higher risk of developing schizophrenia6. Some evidence suggests that autism, too, stems from maternal flu.

Several genetic and physiological studies of people with autism have linked the disorder to genes that regulate immune function and autoimmune diseases, illnesses that occur when the body’s immune system attacks its own healthy cells.

The latest of these was published online 5 July in Pediatrics. Analyzing 4,414 children with autism born in Denmark between 1993 and 2004, scientists observed that children born to mothers with autoimmune diseases — such as type 1 diabetes, rheumatoid arthritis and celiac disease — are up to three times more likely to develop autism compared with children born to healthy mothers7.

The hundreds of variants found in the new Nature studies present an opportunity to further study the connections between immune function and psychiatric disease, says David Ostrov, associate professor of pathology, immunology and laboratory medicine at the University of Florida in Gainesville, who was not involved with the studies.

The next step is to study the variants’ protein products to see whether they would make good targets for potential therapeutics, he notes. He is leading an effort to determine the molecular structure of each protein encoded by the MHC.

“There’s a treasure trove of untapped information here,” he says. “These papers make it seem like the treasure is even bigger than we thought.”

For example, one of the reports found that people with schizophrenia have mutations in NRGN, a gene on chromosome 11 that is known to be involved in memory and cognition. NRGN codes for neurogranin, a brain protein that interacts with another protein, calcineurin, which in turn interacts with proteins from the MHC. It’s likely that other proteins within and outside the MHC work together to increase risk for disease, he adds.

Gejman points out, however, that the MHC isn’t the only interesting region implicated in the new studies. “There are some genes in the region [implicated in schizophrenia] that have nothing to do with immunity or gene regulation,” he says.

His group is now looking at how the newly implicated genes differ between people with schizophrenia and healthy controls, with the eventual hope of finding gene candidates that they can manipulate in mouse models.