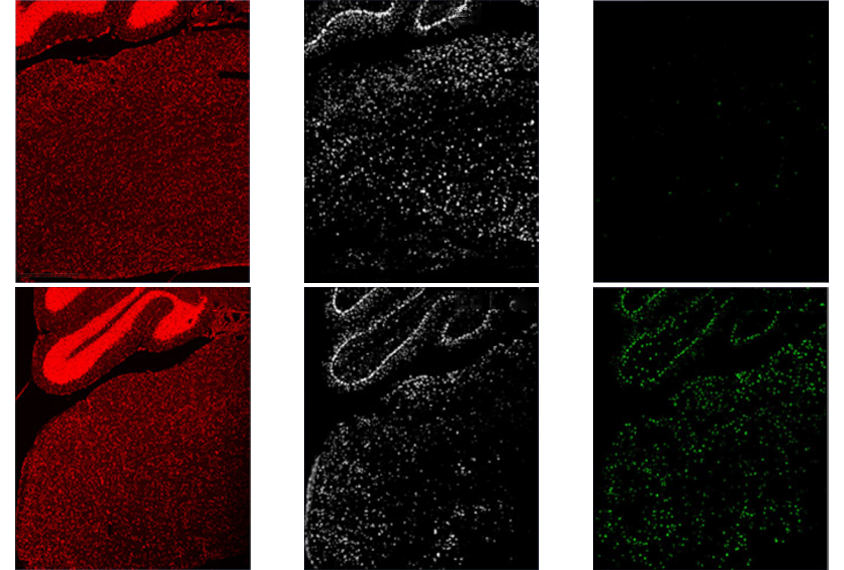 Mice with a gene mutation related to Rett syndrome breathe more easily and live longer after an RNA-editing treatment, according to a new study. The treatment partially restores expression of the mutated gene in the brainstem, which controls such basic functions as respiration.

The method could potentially be tailored for use in people with Rett syndrome, says lead investigator Gail Mandel, professor of biochemistry and molecular biology at Oregon Health & Science University in Portland. The mice have a mutation in the MECP2 gene that involves a single DNA letter swap from guanosine (G) to adenosine (A), which mirrors a mutation seen in people.

Rett syndrome typically arises from mutations in MECP2, a gene on the X chromosome, and primarily affects girls. Its earliest signs, including regression in language and social skills during childhood, overlap with autism. Children with the condition also tend to have breathing issues, including hyperventilation and breath-holding.

The new work suggests it may be possible to alleviate these breathing issues by correcting the mutation in MECP2 mRNA, the single-stranded copy of the gene that conveys the instructions for making MECP2 protein.

“It’s exciting,” says Joshua Rosenthal, senior scientist at the Marine Biological Laboratory in Woods Hole, Massachusetts, who was not involved in the work. Rosenthal’s lab pioneered the RNA-editing technique used in the study, but they have not tested it in animals or people.

“Taking it from this basic concept and seeing it actually delivered by a virus in a mouse, and pretty precisely correcting a mutation and seeing improved physiological output and survival — it’s great,” Rosenthal says.

Mandel and her team injected male Rett mice with two harmless viruses: One expresses an enzyme that edits RNA, and the other contains an engineered RNA sequence that guides the enzyme to the MECP2 mutation. (Female MECP2 mice have a working copy of the gene in some of their cells, which would have complicated the analysis.)

The editing enzyme replaces a functional group in the errant A, changing it into an I (inosine), which the cell’s protein-making machinery reads as a G. About 45 percent of people with Rett syndrome have this kind of single-letter mutation or one of two others that could be similarly addressed with targeted RNA editing, Mandel and her team observed in a Rett research database.

Among all the brain areas the treatment affected, the brainstem had the most efficient recovery of MECP2 expression, RNA sequencing showed, and the treated mice no longer had long pauses in their breathing — effects that lasted at least four weeks, the age at which the researchers tested for editing efficiency. By contrast, injecting wildtype mice with the viruses had no effects on their survival, suggesting that editing targets only the mutated RNA sequence.

The work appeared in August in the Proceedings of the National Academy of Sciences.

One advantage of this strategy is that it carries a lower risk of off-target editing than DNA editing does, says Jan-Marino Ramirez, professor of neurological surgery and pediatrics at the University of Washington in Seattle, who was not involved in the study.

Plus, it’s more effective than DNA editing in cells, such as neurons, that are not dividing, Rosenthal says. The fact that the effects last for weeks is exciting, he says, because it shows that once the virus gets the RNA editing started, the process keeps going for some time.

A major unknown, though, is how long it keeps going, Mandel says.

The edited mice still died sooner than the wildtype mice, none of which died by the end of 28 weeks. Mandel and her team still don’t know why.

Part of the problem is that the animals’ behaviors rely on circuits distributed across the brain, Mandel says. For successful editing, RNA must be accessible to the guide virus, and delivering an RNA-editing virus to every area involved in a given behavior is a tall order. For that reason, improving breathing, which is controlled by the brainstem, is a simpler target than boosting social behaviors, she says.

“It seems likely that the virus, or the promoters in the virus that express the editing cargo, or both, are not yet optimal for reaching the right cell types or enough cells to prevent premature lethality,” Mandel says.

The team plans to tweak its approach to see if they can target other MECP2 mutations, Mandel says. They also plan to use female mice in the next round of experiments, because their longer lifespans should make it possible for the researchers to track how long the effects of editing last.