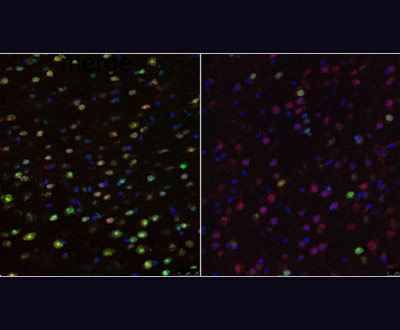 The gene missing or mutated in Rett syndrome, an autism spectrum disorder, is critical for the survival of adult mice, according to a study published 31 May in Human Molecular Genetics1.

Rett syndrome, a debilitating human disorder that results from mutations in a gene called MeCP22, is seen in females almost exclusively.

Between 6 and 18 months of age, girls with Rett syndrome lose the ability to speak or use their hands,  and many of them show behaviors reminiscent of autism, including repetitive behaviors and social deficits.

Because it appears early in life, Rett is typically thought of as a neurodevelopmental disorder. But the new finding adds to a growing body of evidence that MeCP2 is also important in the adult brain.

In the study, researchers analyzed mice in which MeCP2 was deleted in roughly 80 percent of brain cells at specific points in time: 3, 11 or 20 weeks after birth. To the group’s surprise, all animals died at about 40 weeks of age, regardless of when MeCP2 was deleted.

That suggests that the brain is especially sensitive to MeCP2 levels late in adulthood — in this case, around the time that female mice lose their breeding efficiency.

“Why this is is completely mysterious,” says lead investigator Adrian Bird, professor of genetics at the University of Edinburgh. “The only thing that struck us — and I have no idea whether this is a genuine biological parallel or not — is that girls with Rett syndrome don’t have a typical human lifespan.”

Women with Rett syndrome typically survive into their mid-40s, because they have one good copy of the gene, which lies on the X chromosome. Boys rarely survive beyond infancy.

Bird and his colleagues published the first mouse model of the disorder in 2001, showing that female mice with one copy of the mutated gene have multiple litters and apparently normal brain function before showing a Rett phenotype3.

“It seemed that the function of MeCP2 was more to do with maintenance than development,” says Bird, though it took additional evidence for others to accept this idea.

In 2007, Bird and his colleagues showed that many symptoms in the mouse model can be reversed by restoring the protein in adulthood4.

The new findings are in line with another study, published last year, suggesting that MeCP2 plays an important role in adults. Huda Zoghbi’s group showed that inactivating MeCP2 expression in 8-week-old mice causes motor difficulties and learning and memory deficits similar to those of mutant mice that never had the protein5.

“It’s very reassuring that the results are consistent with our results showing that you need this protein throughout life,” says Zoghbi.

Both studies used the same type of mutant mouse. But Bird’s group found that 11-week-old mice survive about 30 weeks after the MeCP2 gene is deleted, whereas Zoghbi’s survived only 13 weeks.

The discrepancy in longevity might be explained by the different regimens the groups use to dampen brain MeCP2 and the different levels that remain. In Zoghbi’s mice the estimated level is five percent of the normal protein level, whereas in Bird’s it is eight percent.

“It speaks to the exquisite sensitivity the brain has to changes in this protein. Even a little bit of it is protective,” Zoghbi says. “That’s really important to think about as we move forward either interpreting the [mouse] data or thinking of interventions.”

By deleting MeCP2 at three points in time in the new study, Bird’s group was able to show that mice whose protein is deleted earlier in life end up surviving longer without the protein. (The researchers had expected each group to survive a set amount of time without the protein.) This suggests the brain grows more dependent on the protein as it matures, Zoghbi says.

However, all mice used in Bird’s and Zoghbi’s studies — including the controls, which show some mild symptoms of Rett — had less MeCP2 than normal mice do. This deficiency of brain MeCP2 before the gene is inactivated might also contribute to the premature death of older animals, Zoghbi says.

It’s unclear why mice are particularly dependent on MeCP2 at 40 weeks, the researchers note. The protein is thought to control the expression of many genes and help pack chromosomes into cells, but no one knows why deleting it in the brain should cause mice to die weeks later.

“Why are these animals dying? Are there abnormalities at the level of the chromosome? The only way to know is to examine the whole genomes of these mice,” says Janine LaSalle, professor of medical microbiology and immunology at the University of California, Davis, who was not involved with the work.

It may also be important to know which genes affected by MeCP2 loss are needed for survival, adds Chinfei Chen, associate professor of neurology at Boston Children’s Hospital, who was also not involved in the study.

Then again, although mortality is a straightforward endpoint for studies, it may not be relevant to the cognitive deficits that occur with Rett syndrome. The genes involved in longevity are not necessarily the same as those affected by loss of MeCP2 in earlier stages of life, Chen notes.

“Knowing the complexities of MeCP2 and its multiple forms and modifications, it is likely to play multiple roles at different stages of life,” LaSalle says.

Even without knowing the protein’s role in adulthood, researchers are hopeful that symptoms of Rett syndrome can be reversed. Restoring MeCP2 in older mutant mice rescues the animals not only from a host of neurological deficits but from premature death, Bird’s group showed in its 2007 study.

“It’s worth trying to restore MeCP2 levels regardless of the age of the patient,” Chen says.