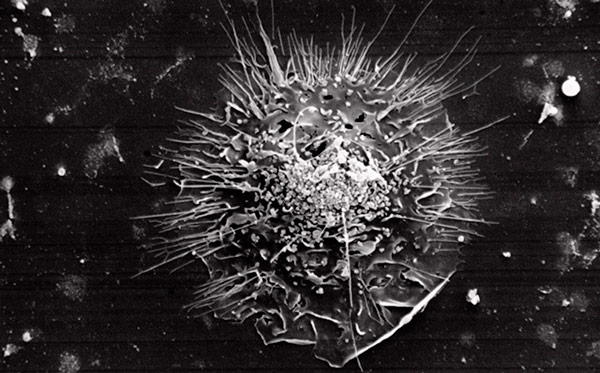 The mutation that causes Rett syndrome may spark uncontrolled inflammation throughout the body and brain, suggests a study published last week in Immunity1. The findings may explain the syndrome’s wide range of symptoms, from seizures to gut problems.

Rett syndrome is an autism-linked disorder that usually stems from mutations in MeCP2. The disorder primarily affects girls, who appear to develop normally until around their first birthday and then rapidly lose abilities such as coordination and language.

This regression was one hint that the disorder may involve not just neurons but cells that help maintain neurons’ integrity over time. Several studies over the past few years have shown that support cells in the brain, called glia, may be involved in Rett syndrome. For example, normal neurons develop stunted branches when cultured alongside glia lacking MeCP2. Specifically, researchers eyed microglia, immune cells in the brain, as key culprits in the syndrome.

The new study solidifies this link, finding that mouse models of Rett — which lack MeCP2 — have fewer microglia than controls do, and those that exist are hyperactive. The researchers found the same trend for macrophages, immune cells present throughout the body that consume and destroy intruders.

“The study shows that MeCP2 is very important in the function of microglia and macrophages,” says lead researcher Jonathan Kipnis, professor of neuroscience at the University of Virginia in Charlottesville.

The strongest evidence of microglia’s role in Rett syndrome came from a controversial 2012 study by Kipnis’ team. This study showed that a bone marrow transplant following radiation lengthens the lifespan of Rett mice and normalizes their weight.

The radiation eliminates microglia and macrophages, along with other immune cells. The transplant then repopulates the brain and body with normal cells. Without brain radiation, the researchers reported in that study, the transplant has no effect, suggesting that healthy microglia are the key element in this response. But other laboratories have struggled to reproduce these results.

In the new study, Kipnis and his team showed that microglia in the Rett mice are overactive and depleted after symptoms appear around 9 weeks. Macrophages elsewhere in the body, including in the gut, are also sparse.

“The study shows that immune cells are really affected by deletion of MeCP2, which has been really overlooked in the field,” says Dorothy Schafer, assistant professor of neurobiology at the University of Massachusetts in Worcester. “They saw this effect on most populations of macrophages in the body, which would have a tremendous effect in [Rett syndrome] impairments.”

Kipnis’ team also engineered mice so that they could switch on MeCP2 expression in microglia and macrophages when symptoms emerge. As with the bone marrow transplant, these mice live about twice as long as the Rett mice and grow to a healthy weight.

Looking further into how immune cells might contribute to Rett syndrome, the researchers found that in microglia and macrophages from Rett mice, genes involved in inflammation persist at high levels long after the initial inflammatory response. The results suggest that MeCP2, which dampens gene expression, normally holds this response in check.

Some of the overactive genes are known to spike in response to low oxygen levels. Children with Rett syndrome often have breathing problems, which may lead to low brain oxygen levels. Without MeCP2, the response to hypoxia may be enhanced, Kipnis says, ultimately damaging the brain.

Overall, this evidence for immune cells’ importance in Rett supports the idea that a bone marrow transplant can alleviate some symptoms of the syndrome. But it also suggests that macrophages are only one piece of a larger puzzle.

“I like the fact that restoring MeCP2 in macrophages doesn’t cure the mice, because this is a progressive disease that is very multifactorial,” says Ania Majewska, associate professor of neurobiology and anatomy at the University of Rochester in New York. “Fixing one part of it will probably be beneficial, but in the end the macrophages probably can’t keep up.”

Kipnis and his team have shown that removing MeCP2 from microglia alone does not cause significant Rett-syndrome-like symptoms in mice. By contrast, deleting the gene only from neurons that dampen brain signals reproduces most symptoms seen in Rett mice. This casts microglia as “amplifiers” of the disease rather than instigators, Kipnis says.