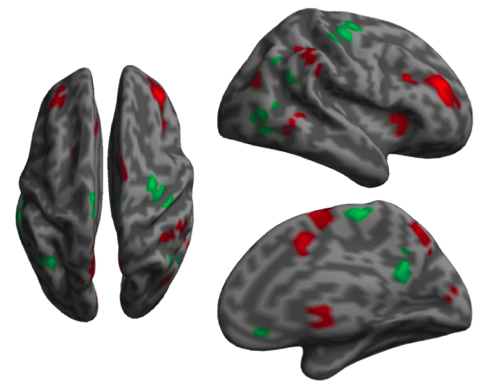 Wandering thoughts: Several brain areas show high (red) or low (green) activation during subtle changes in emotional arousal, such as when thinking of a loved one.

In the past couple of years, many researchers have reported atypical brain connectivity in people with autism lying passively in a brain scanner.

But those differences may be the result of what those individuals are thinking about or of automatic body functions, rather than of an underlying neural defect, according to a poster presented Sunday at the 2012 Society for Neuroscience annual meeting in New Orleans.

“This is a new direction, we think, a new hypothesis,” says lead investigator Jin Fan, assistant professor of psychology at Queens College, the City University of New York. Researchers who scan the brains of individuals with autism at rest should be cautious in their interpretations, he adds. “They assume that the [participants] are equally resting there, but they’re not.”

Using magnetic resonance imaging, the researchers scanned the brains of 17 high-functioning adults with autism and 15 controls over a six-minute period in which the participants rested quietly in the scanner. This technique, called resting-state functional connectivity, measures the synchrony of activity between brain regions, which is thought to be a sign of communication between those regions.

During the scans, the participants donned harmless electrodes on their toes. The electrodes allowed the researchers to measure tiny changes in the skin’s electrical conductance — a measure of how easily electric current travels through a material. Because it changes with sweat, skin conductance is a sensitive marker of emotional response.

In August, Fan and his colleagues reported that in healthy people, activity in several regions of the resting brain is associated with changes in skin conductance. Their results suggest that the so-called resting brain is processing information from emotions and the autonomic nervous system, which controls involuntary body functions such as reflexes and heart rate1.

“While you’re lying at rest in the scanner, your body is still, but your brain is still aware of your body,” says Tehila Eilam-Stock, a graduate student in Fan’s lab who presented the work. “Your heart is still beating, you’re breathing, your digestive system — everything is working and it’s all getting processed in the brain all the time.”

In particular, the skin conductance rate of healthy people drives connectivity in the default mode network, a long-distance circuit that’s thought to be involved in rumination and self-reflection. Several studies have reported that individuals with autism have weak connections in this network.

In the new study, the researchers found that individuals with autism have significantly fewer skin conductance changes, which reflect emotional responses and other involuntary processes, over the six-minute window.

And unlike controls, individuals with autism do not show an association between skin conductance and connectivity in the default mode network. Instead, their emotional arousal goes along with activity in brain areas that process sensory information, such as sight and sound.

The data suggest that glitches in the autonomic nervous system underlie some aspects of autism. The imaging patterns seen in some people with the disorder might also reflect their extreme sensory sensitivities, the researchers say.

“We can’t really know what’s driving their skin conductive response or what actually goes on inside their minds,” Eilam-Stock says. “People with autism may be concentrating more on the visual and auditory stimulation in the scanner.”