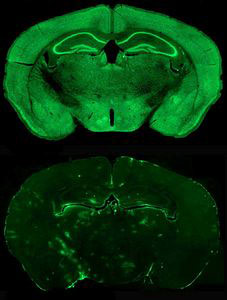 Dark disease: Mouse brains expressing a fluorescent version of UBE3A (top) don’t show any fluorescence when the maternal copy of the gene is missing (above).

Dark disease: Mouse brains expressing a fluorescent version of UBE3A (top) don’t show any fluorescence when the maternal copy of the gene is missing (above).

Researchers have identified a compound that shows promise as a treatment for Angelman syndrome, a developmental disorder related to autism. The unpublished results were presented Tuesday at the 2011 Society for Neuroscience annual meeting in Washington, D.C.

Using a fluorescent version of the Angelman syndrome gene, the researchers screened thousands of compounds to identify a small molecule that can treat the disorder. Because the details are unpublished, the researchers declined to name the molecule, but the report was received with enthusiasm nonetheless.

“This is very, very exciting,” says Emanuel DiCicco-Bloom, professor of neuroscience at Rutgers University in New Jersey, who was not involved with the work. “It’s a beautiful assay and pretty unique.”

Angelman syndrome is caused by the loss or inactivation of the UBE3A gene, which codes for a protein that regulates the levels of other molecules. UBE3A is one of a subset of genes that undergoes imprinting, meaning that only one copy of the gene, in this case the maternal copy, is active.

This makes Angelman syndrome a very promising disorder for which to find a therapeutic, says Ben Philpot, associate professor of cell and molecular physiology and the University of North Carolina, Chapel Hill. “[Our] strategy is to try to identify a small molecule compound that can awaken the dormant allele.”

The strategy relies on a mouse engineered to express a fluorescent version of the UBE3A protein1. The brains of these mice light up, but not when the maternal copy of UBE3A is deleted.

The researchers bathed the neurons from these mice in a series of more than 2,000 compounds, looking for one that would activate paternally expressed UBE3A. They found one that rescues fluorescence when used at low concentrations.

The compound also has long-term effects in mice. When injected into mouse spinal cords, it turns on expression of paternal UBE3A in these cells. Mice injected with the molecule once a day for two weeks continue to express the paternal allele for up to three months, the study found.

Still, although the compound shows great potential as a treatment for autism, there is need for caution, researchers say.

“I would want to know whether it turns on the expression of other imprinted genes,” says DiCicco-Bloom, who mentions a family of genes that are important in development and are paternally imprinted. “I wouldn’t want a reagent that interfered with those kinds of imprinting genes.”

Preliminary experiments have shown that the compound is very specific, Philpot says, but he also advocates the need for caution.

“This isn’t a treatment for Angelman syndrome yet,” Philpot says. “It still needs to be vetted through the proper clinical and preclinical protocols.”