Autism and the coronavirus pandemic 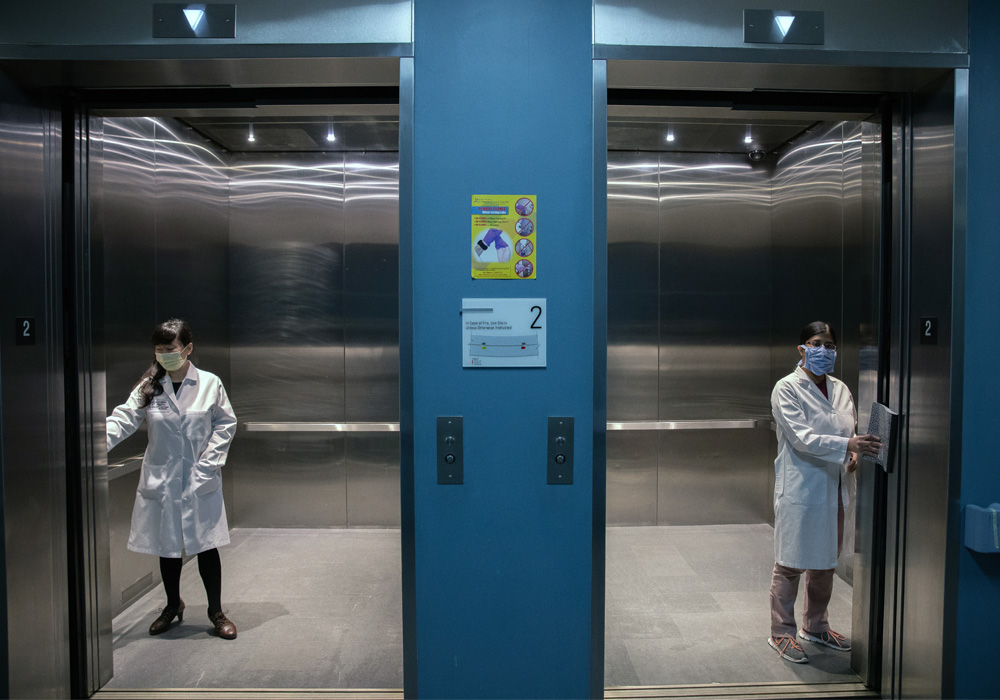 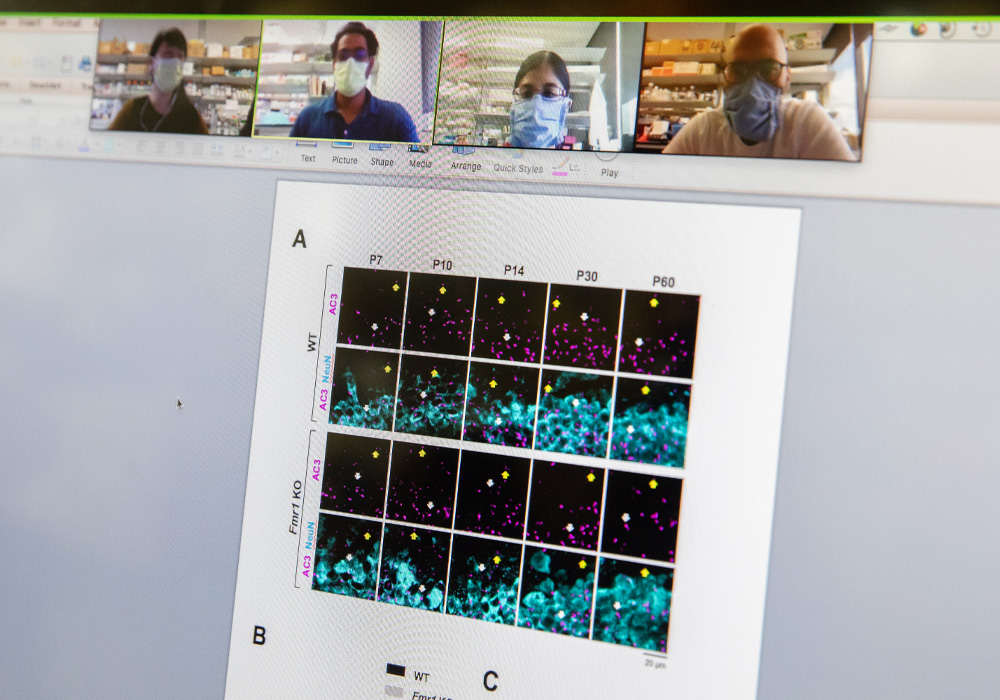 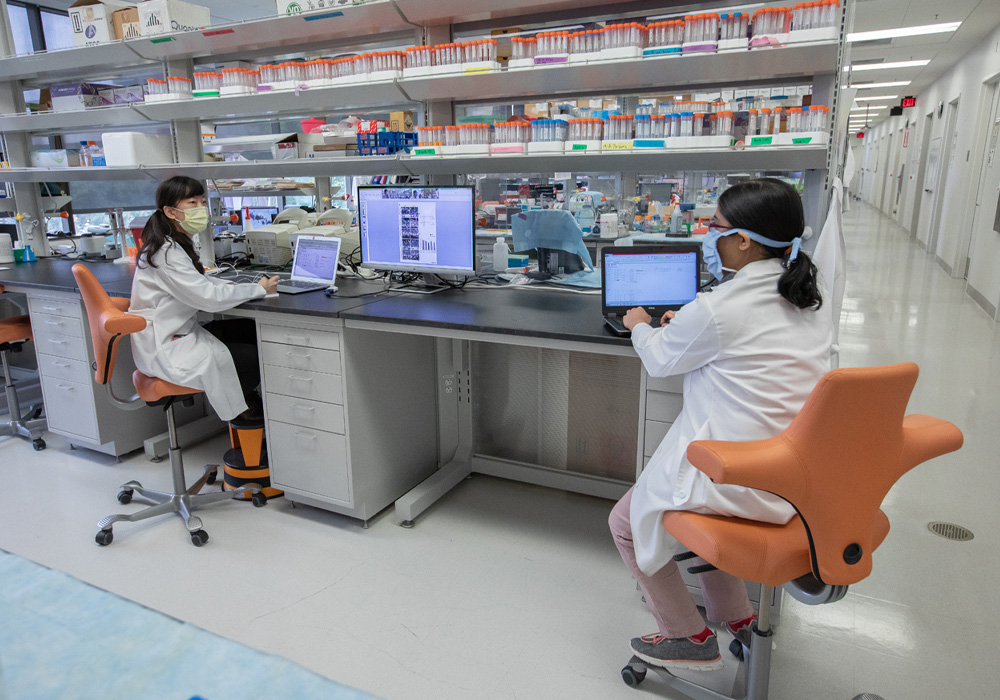 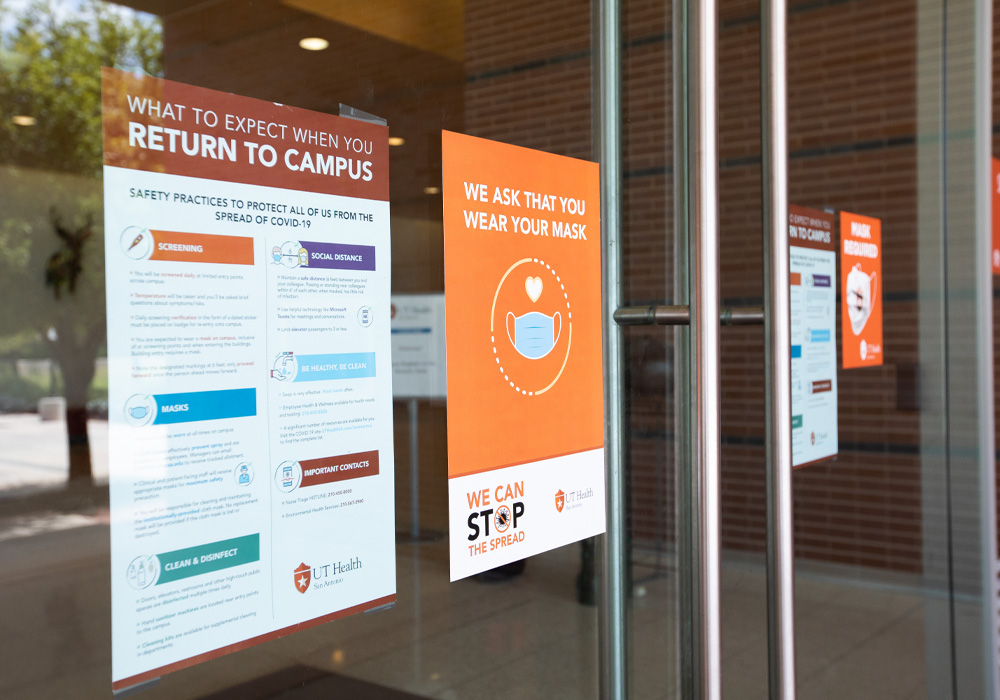 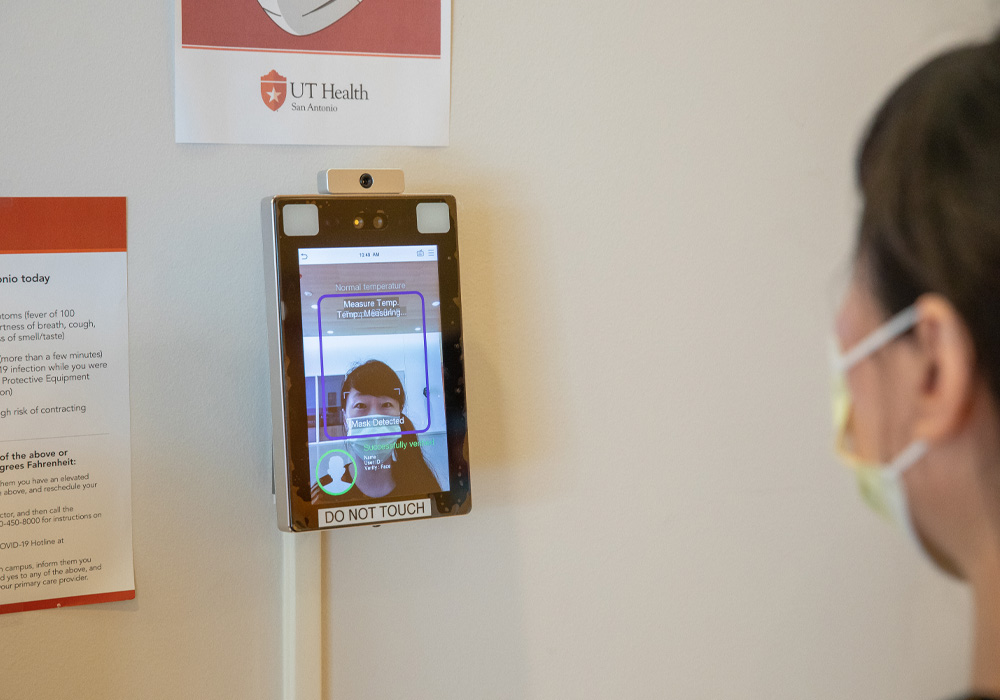 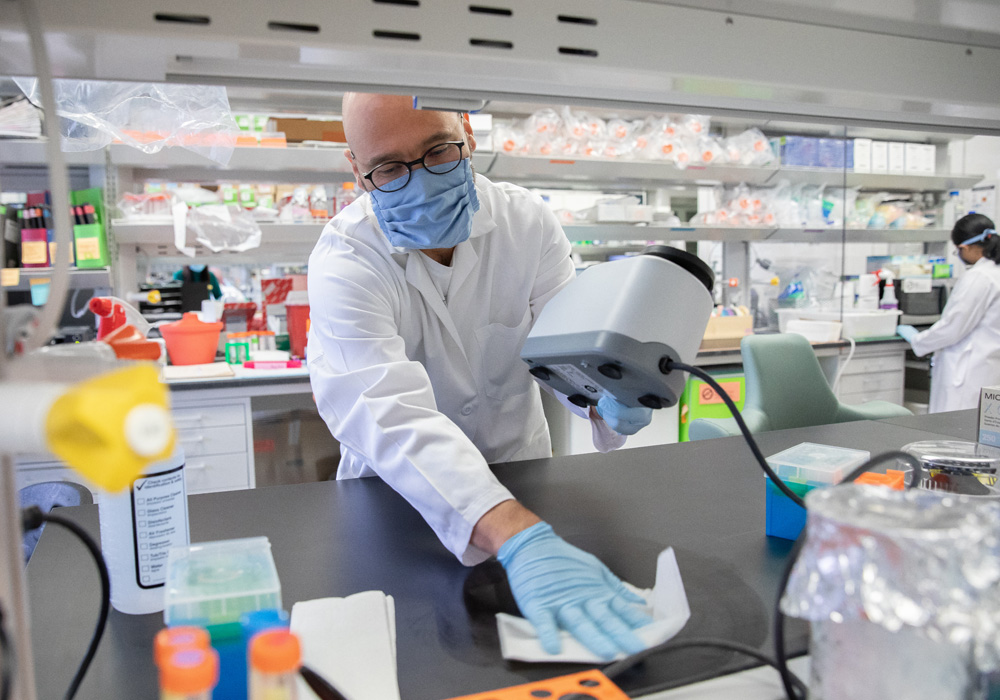 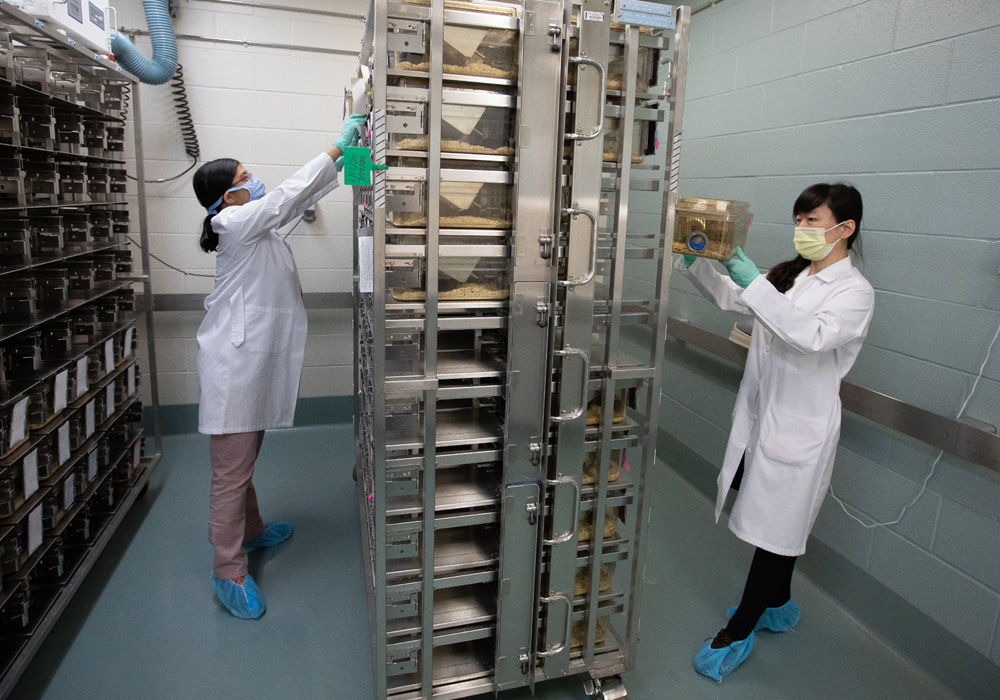 Zoom in: Lee (left) videoconferences with colleagues even when they are all present in the lab.

What to expect: Signs explain new policies for working on campus during the pandemic.

Animal house: Researchers stay home as often as possible but come in for essential work, such as caring for lab mice.

Autism and the coronavirus pandemic

This article has been modified to reflect a decision made on 14 July by the Trump administration regarding international students.

Four months ago, researchers scrambled to save their work as the coronavirus pandemic shuttered universities and closed labs. Now, with restrictions lifting — even as cases rise in some parts of the United States and elsewhere in the world — many researchers are cautiously returning to work, socially distanced and with masks in hand.

Many of the precautions they are taking in their labs resemble those put in place in businesses and restaurants: wearing face masks, maintaining a physical distance from others and staying home as much as possible. But lab work presents unique complications and calls for additional policies and culture shifts, scientists say.

“You can’t dive in and have eight things going on, so we have to make real careful decisions about what are the priorities,” says Gary Bassell, professor of cell biology at Emory University in Atlanta, Georgia. “Everyone just wants to get back to how it was, and you can’t do that.”

Rather than spending all day on campus, researchers are going in only for necessary tasks, such as taking care of lab animals or conducting experiments. To limit interactions, many labs are requiring people to preschedule their time in specific rooms or with certain equipment. And all other work, such as writing papers, analyzing data or conversing with coworkers, is being done from home.

For researchers who work with people, reopening is particularly fraught. When the pandemic first hit, Clare Harrop quickly pivoted her in-person work to a remote study of the pandemic’s impacts on autistic children and their families. But Harrop, assistant professor of allied health sciences at the University of North Carolina at Chapel Hill, can’t conduct her research, which ordinarily involves electroencephalography and eye-tracking measures, online forever.

She has returned to work, but she won’t consider bringing families back for research while cases are still rising in the area. And although she hopes to bring them back after September, she anticipates that many won’t feel comfortable returning until at least early 2021. She’s also concerned that pandemic-related restrictions, such as having to wear a mask during brain-imaging scans, could affect her results.

“I wouldn’t feel comfortable bringing my kids in now, so I don’t feel I should ask parents to come in either,” Harrop says. “Particularly since my research isn’t intervention based.”

In Bassel’s lab in Atlanta — where cases are also rising — students are required to wear surgical masks and face shields when in close proximity to another person, such as when they are performing surgery on an animal. His university has instituted training for students who are going back to campus.

“I feel safer at the lab than I do [out] in Atlanta,” Bassell says.

But not everyone feels supported by their institutions. Anis Contractor, professor of physiology at Northwestern University in Chicago, Illinois, says he has been disappointed with his university’s response. He says some promised measures, such as temperature sensors and mandatory testing for anyone on campus, have yet to materialize. (A university spokesperson says that although they discussed using scanners, they never committed to them; the spokesperson pointed Spectrum to a website that says testing is available on site for people with coronavirus symptoms.)

Communication from the university has also been unclear, Contractor says, leaving the burden of safety on individual professors.

“It’s up to us to make sure [a plan] is in place, that we make our work environments as safe as we can,” he says. “There isn’t any leadership on that at all.”

Reopening also raises concerns about longer-term disruptions to hiring, which could slow down research timelines for years to come.

Hye Young Lee, assistant professor of cellular and integrative physiology at the University of Texas Health Science Center at San Antonio, says her university has paused hiring with a few exemptions. Applying for those exemptions, though, builds in further delays, during which time less work gets done.

“That’s a domino effect,” Lee says. “It will definitely negatively impact us.”

More labs may be shorthanded because of travel restrictions. On 22 June, the Trump administration announced new limits on visas for foreign workers in the United States, arguing that this would help Americans find jobs in the pandemic-ravaged economy. The order, set to be in place through the end of 2020, includes H-1 and some J-1 visas, although the J-1 restrictions do not apply to researchers.

Five years ago today, I moved to the US to pursue an academic career and explore new research directions. Today, I’m overwhelmed by deep anxiety about the upcoming Executive Order suspending work visas including H-1B, which I’ve applied for. Speechless.

Still, researchers are concerned that they may be unable to bring in new students for the academic year. Sung Han, assistant professor of biology at the Salk Institute for Biological Studies in La Jolla, California, says he has heard that some people who were considering postdoctoral positions at the institute are now turning to institutions in Europe and Canada. His own lab is largely made up of international students, who are worried about renewing their visas.

“If this situation continues, they will lose their opportunities,” Han says. “They are quite concerned about it. Hopefully this is a temporary decision and it will come back to normal soon, but if it continues it will hugely impact in a negative way the progress of research in the U.S.”

The 22 June order exempts workers who are already in the U.S., but many say the announcement caused additional stress and confusion at an already difficult time. And many scholars working in the U.S. are unsure if and how quickly they will be able to renew their visas, creating fears about whether it’s safe to leave the country.

“It makes us think, ‘Oh, maybe we should not travel at this moment for any reason,’” Lee says.

Pernille Bülow, a doctoral student in Bassell’s lab, was planning to return temporarily to her home country of Denmark after she graduates this year. But she has decided to take a job in the U.S. for now. She is here on an F-1 visa, which is not included in the order, but the frequent changes from the Trump administration have made her wary of getting stuck abroad.

“I don’t dare to leave the country right now,” Bülow says. “I just don’t know what they’re going to do. I’m being super cautious about it.”

The Trump administration has also banned travelers from China, Iran and 26 European countries, known as the Schengen Area, to try to limit the spread of the coronavirus. Those restrictions have blocked some researchers who were abroad before the pandemic hit from returning to work. For example, autism researcher Jonathan Sebat posted on Twitter that the Schengen ban has for months prevented a postdoctoral student in his lab at the University of California, San Diego from entering the country, and then shared similar stories from other researchers.

“Certainly it’s going to be really devastating for so many universities if you can’t recruit new talent internationally,” Bassell says.

My rage tweet from this morning, while true (my postdoc is currently barred due to travel restrictions from Schengen countries), was misleading. Todays executive order does NOT apply to postdocs. When the Schengen ban is lifted she will be able to come back???? https://t.co/7abdp0UDAg

The lack of clarity is compounding emotions many researchers say they already felt about returning to work. Many describe a mixture of anxiety and excitement, and that they may miss the slower pace of lockdown life. Contractor says he is navigating his lab members’ different levels of comfort with risk, allowing those who don’t feel safe to stay home.

Some investigators say their labs weathered the initial shutdown, but a second would be catastrophic. Lee says she and her lab members are working hard to take advantage of the time they have now, unsure if they’ll be forced home again. Bülow is hurrying to collect the data she needs to graduate.

But some are also finding surprising benefits. Because time in the lab is limited, researchers are more flexible with their schedules, alleviating pressure to stay on campus for long hours.

That change has given some scientists time to take stock and get more involved in broader issues, including social-justice advocacy and protests related to the Black Lives Matter movement, Edokpolor says.

“As scientists we kind of get wrapped up and say, ‘Oh this doesn’t affect us because we’re working on this really niche thing.’ But we’re human,” she says. “I really do think that everyone can really grow and just think about other life aspects that do fundamentally affect our ability to do science. That’s the silver lining.”