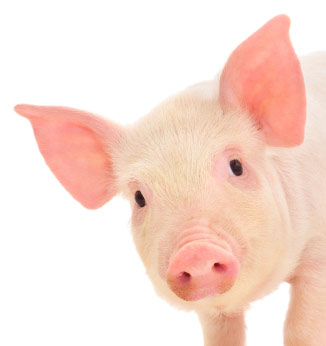 Swine secrets: Researchers have mapped pig versions of 11 of the genes in a chromosomal region linked to autism and related disorders.

Genetically engineered pigs may soon join the legion of animal models for autism-related disorders. Researchers are exploring pig models for Prader-Willi syndrome, a genetic disorder linked to cognitive and motor problems and, most strikingly, chronic hunger and obesity.

Popular though they are, mouse models don’t always reflect the same symptoms as their human counterparts. This is the case for so-called hyperphagia — or extreme hunger — seen in people with Prader-Willi.

Pigs have a metabolic system that is similar to that of people, and they have been used to study metabolic and heart disorders.

The region differs somewhat between pigs and humans: Genes within the human region are scattered across two chromosomes in pigs.

On Thursday, at a conference organized by the Dup15q Alliance in Boston, Robert Nicholls, professor of pediatrics at the University of Pittsburgh, described his plans to develop a pig model of the disorder. His team has already mapped the region in pigs, identifying pig versions of 11 of the genes in the deleted region.

Nicholls’ team also helped to sequence the region for the Swine Genome Sequencing Consortium. The sequence is under review and is expected to be published soon, he says.

This won’t be the first pig genetic model of a human disease. For example, researchers developed a swine model of cystic fibrosis, because mice don’t develop the thick mucus typical of people with the disorder.

Nicholls says pigs may also be helpful for modeling cognitive issues that are difficult to assess in mice. The animals are smart: Even 2-week-old pigs can be trained to find food in a maze if enticed with a sufficiently tasty reward, such as chocolate milk.