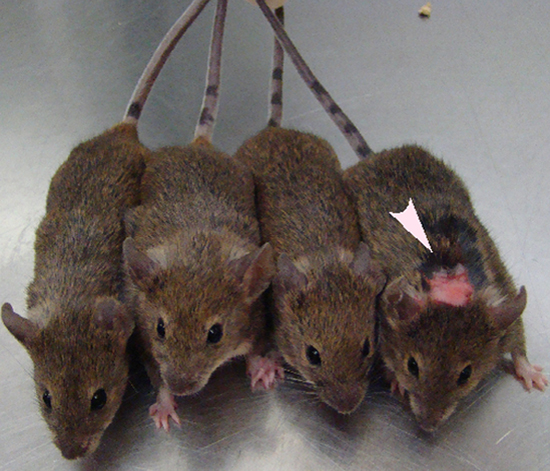 Mutant mouse: The new model for Rett syndrome recapitulates nearly all features of the syndrome, including compulsive clasping of forepaws and over-grooming.

A new mouse model for Rett syndrome shows that disrupting a single brain messenger can produce nearly all of the characteristic features of the syndrome, researchers report today in Nature1. The work implicates the molecule, gamma-aminobutyric acid (GABA), in autism and other disorders.

Some researchers have suggested that autism involves an imbalance of excitation and inhibition, and many mouse models of autism have fewer inhibitory neurons compared with controls.

In the new study, researchers bred two strains of genetically engineered mice in which GABA-releasing neurons lack MeCP2, the gene that is mutated in Rett syndrome. Rett syndrome shares many features with autism, including repetitive behaviors and trouble with language.

“This is a very nice mouse model that will open up many opportunities for people who are working in the field,” says Abdeslem El Idrissi, professor of biology and neuroscience at the City University of New York, who was not involved in the study.

In control mice, neurons that release GABA contain roughly twice as much MeCP2 as do neighboring cells, the researchers found. Binding to DNA, MeCP2 promotes the expression of two closely related enzymes, GAD1 and GAD2, that produce GABA.

In the mutant mice, by contrast, these enzymes are expressed at lower levels, and their neurons produce about 30 to 40 percent less GABA than do control mice.

In recent years, Zoghbi’s team and others have created a variety of ‘conditional knockouts’ — mice lacking MeCP2 in particular groups of neurons — that show different subsets of Rett syndrome characteristics.

For example, mice lacking MeCP2 in the amygdala show impaired learning and memory2, and those missing MeCP2 in the excitatory neurons of the forebrain are anxious and uncoordinated3.

So it was somewhat unexpected that in the current study, mice lacking MeCP2 only in GABA-releasing neurons recapitulate nearly all of the characteristics of Rett syndrome.

“This paper shows nicely that a single type of neuron might explain a large part [of Rett syndrome],” says Takao Hensch, professor of neurobiology at Harvard University, who was not involved in the work. “It’s a great demonstration that GABA circuits are playing a crucial role.”

When they are about 5 weeks old, the mice begin to lose motor coordination, they show social behavior reminiscent of Rett, and their learning and memory deteriorates. Repetitive behaviors also emerge: they groom themselves so compulsively that they develop bald spots, or even injure themselves.

Perhaps most striking of all, the mice repeatedly clasp their forepaws together in a manner that is almost identical to the compulsive hand-wringing that is a hallmark of Rett syndrome.

None of the other conditional knockout mice generated so far have shown this unique feature, Zoghbi notes. “This was the first one that told us the importance of inhibitory neurons for compulsive and stereotyped behaviors,” she says.

By the time they are 26 weeks old, about half of the mice lose a significant amount of weight, develop respiratory problems and die. Similarly, many people with Rett syndrome have breathing difficulties, which can contribute to premature death.

The researchers developed a second strain of mice that lack MeCP2 in GABA-producing cells, but only in the forebrain. These mice don’t have respiratory problems and live a normal life span. But they show the same suite of behavioral changes linked to Rett syndrome: repetitive behaviors, impaired motor coordination and altered social behavior.

In October, researchers at the University of Bristol in the U. K. showed that improving GABA signaling in a different mouse model of Rett syndrome alleviates their breathing difficulties4.

“That was really encouraging,” Zoghbi says. She plans to study how restoring GABA signaling in a mouse lacking MeCP2 in all neurons affects other Rett symptoms. The full picture is likely to be complicated, however. For example, researchers reported today in Cell that Rett neurons have fewer synapses that release glutamate, an excitatory neurotransmitter5.

Zoghbi also speculates that mutations that lower GABA signaling to a lesser extent — say, five or ten percent — could be involved in autism or other conditions. As data about copy number variations, single nucleotide polymorphisms and other genetic variations accumulate, she says, “This tells us, pay attention to the GABA system.”