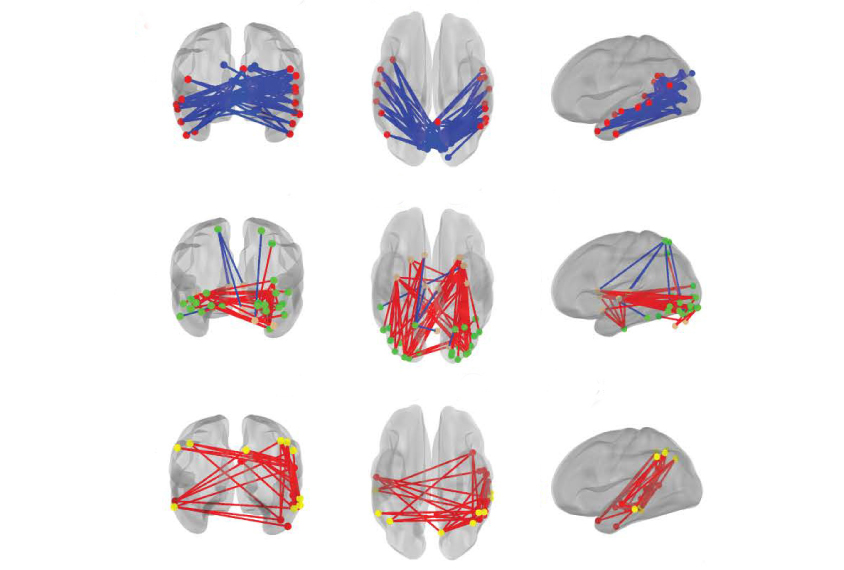 Dynamic duos: Patterns of brain connectivity linked to repetitive behaviors change as a child grows from 12 (blue) to 24 (red) months.

Children who have repetitive behaviors, a core autism trait, show particular patterns of brain activity as early as 1 year of age, according to a new study1.

But few studies have probed the functional connectivity — synchronous activity between pairs of brain regions — that underlies repetitive behaviors.

“We believe that this is one of the first, if not the first, studies of functional brain connectivity in relationship to restricted and repetitive behaviors in the first years of life,” says lead investigator John Pruett, associate professor of psychiatry at Washington University in St. Louis, Missouri.

They also shed new light on how brain regions in autistic people interact. For example, the study highlights increased connectivity within the superior temporal sulcus (STS) — a region involved in recognizing facial expressions, body movements and other aspects of social interaction; the STS is thought to be impaired in autism.

Social-communication difficulties are also considered to be a core trait of autism, but they are thought to evolve independently from repetitive behaviors. The new results suggest that both involve the STS, however.

“That is interesting,” says Ralph-Axel Müller, professor of psychology at San Diego State University in California, who was not involved in the research. “It could suggest why [autism] includes both deficits in social communication and restricted and repetitive behaviors.”

Pruett’s team scanned the brains of 167 toddlers aged 12 or 24 months while they slept, using functional magnetic resonance imaging; they evaluated 38 of the children at both ages. The children are part of the Infant Brain Imaging Study, an effort to track brain development in babies at risk for autism.

Different forms of repetitive behavior are associated with distinct connectivity patterns among pairs of brain regions, and these patterns depend on age, the team found.

“This is atypical,” Pruett says, but consistent with previous findings in autism. The daydreaming and attention networks are not active at the same time in most people. Yet previous research in autistic children suggests that unusual connectivity between these two networks underlies rigid behaviors and restricted interests2. “This story kind of fits,” he says.

“You can probably make any set of networks make sense,” says Emily Jones, lecturer at Birkbeck, University of London, who was not involved in the research. It’s also unclear why the brain regions associated with repetitive behaviors differ by age, she says.

Pruett agrees that the results are preliminary. “We’re very excited about what’s in this paper, but this needs to be replicated in an independent sample,” he says.