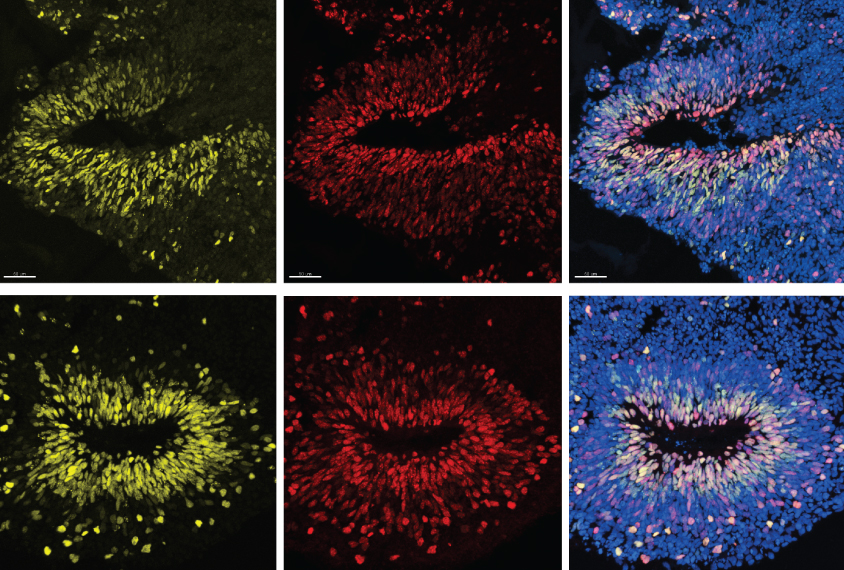 The loss of CHD8, a top autism gene, speeds up the production of certain neurons and leads to overgrowth in brain organoids — spheres of cultured brain cells — according to an unpublished study. This overgrowth resembles the macrocephaly, or enlarged head size, seen in many people with mutations in the gene.

CHD8 regulates the expression of a number of other genes. People with mutations in CHD8 usually have autism, and often have larger-than-average heads.

Researchers grew cerebral organoids from human embryonic stem cells missing one copy of CHD8 and tracked their development over 120 days. These organoids produced about half the usual amount of CHD8 protein. They also produced inhibitory neurons more rapidly than usual, but their production of excitatory neurons was delayed. As a result, the organoids grew larger than those with two intact copies of the gene. This finding jibes with the popular theory that autism involves too much excitation or too little inhibition in the brain.

Significant differences in gene expression emerged by day 10 of development. At this point, researchers identified 868 genes that were dysregulated as a result of the loss of one copy of CHD8. This finding tracks with the existing hypothesis that CHD8 haploinsufficiency affects human brain development very early on.

For instance, at day 20, there were 665 dysregulated genes in immature inhibitory neurons, but by day 120, this number fell to 22.

“Some neuronal populations were much more dysregulated upon CHD8 haploinsufficiency than others,” says co-lead researcher Giuseppe Testa, professor of molecular biology at the University of Milan and director of the stem cell epigenetics unit at the European Institute of Oncology in Italy. In addition to the immature inhibitory neurons, several types of excitatory neurons were also significantly dysregulated.

Notably, genes involved in processing and metabolizing RNA were significantly dysregulated in these cells, Testa says. “This idea of RNA processing as this key layer of vulnerability is coming up as a major theme in [autism], and this work clearly provides a very cogent articulation of that.”

The findings suggest that time is a crucial factor to consider when tracing the effects of mutations in this gene.

“Space has always been considered very prominent, in terms of circuitry, in terms of cell types,” says co-lead researcher Gaia Novarino, professor of neuroscience at the Institute of Science and Technology in Klosterneuburg, Austria. “What we have observed here is that if you are not looking throughout time, you may miss important, transitory effects that really can have a great impact on brain development.”

Researchers also looked at organoids grown from cells taken from two people with CHD8 mutations who did not have macrocephaly, and didn’t see the same alterations in neuron development.

Novarino and Testa plan to examine organoids with other autism-linked gene mutations to further unravel the role of RNA dysregulation in brain development.

This article has been modified from the original, which incorrectly stated that the production of excitatory neurons was more rapid than usual and delayed for inhibitory neurons.