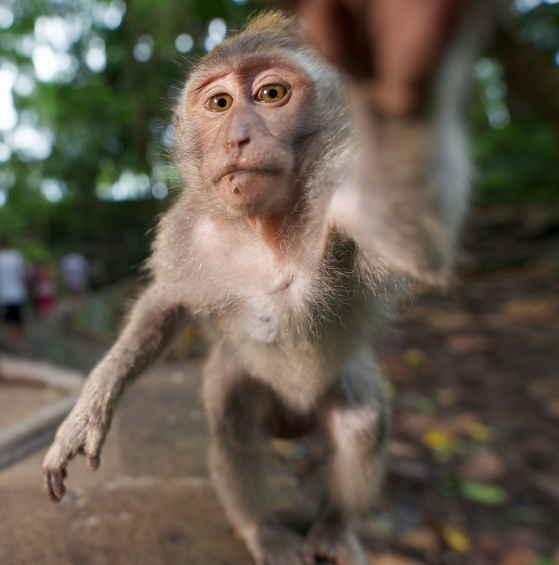 Monkey motion: Researchers trained monkeys to reach, after waiting for a cue, for a shape projected in front of them.

Monkey motion: Researchers trained monkeys to reach, after waiting for a cue, for a shape projected in front of them.

Researchers can delay a monkey’s reaching movement by shining a beam of light into its brain, according to unpublished research presented at a poster session Sunday at the 2011 Society for Neuroscience annual meeting in Washington, D.C.

Researchers have used the technique, called optogenetics, to manipulate several brain circuits in mice, including those that control movement, anxiety and social interactions.

Because people are more similar to monkeys than to mice, the primate version of this flashy technique will be invaluable for understanding which circuits underlie human behaviors, the researchers say. It could eventually lead to treatments for motor or psychiatric disease, akin to deep brain stimulation, they add.

“As optogenetics becomes more viable as a therapeutic tool in the future, we’re beginning the process of validating safety and efficacy in non-human primates,” says Dan O’Shea, a graduate student in Krishna Shenoy‘s lab at Stanford University in Palo Alto, California, who showed the poster.

In mouse experiments, researchers genetically engineer the animals to carry light-sensitive proteins, called opsins, in the membranes of selected cells, such as excitatory neurons. When hit with a laser beam, the neurons fire.

Because genetic engineering is more complex in monkeys than in mice, researchers inject monkeys with a virus carrying the opsin gene directly into the part of the brain they want to affect. The first successful demonstration of the technique in monkeys was reported in 20091. Earlier this year, Shenoy’s team debuted a toolbox of several additional opsins for use in monkeys2.

In these studies, however, light stimulation produced changes in neuron firing, but did not change the monkeys’ behaviors.

In the new study, the researchers used an opsin that responds to red light. Because red light has longer wavelengths than the blue, green or yellow lights used previously, it can probe deeper into brain tissue and have a more pronounced effect.

O’Shea injected an adeno-associated virus that preferentially targets excitatory cells into the premotor cortex of a rhesus macaque monkey. This region is involved in planning motor movements.

A few months later, the monkey sat in front of a screen and saw a yellow square that would flicker a few times then stop. The researchers trained the monkey to reach out and touch the square as soon as it turned solid.

While the box was flashing, the researchers delivered a redlight through a surgical shunt in the targeted brain tissue. On these trials, the monkey was slower — by about 25 milliseconds — to reach for the solid target than on trials when light was not delivered.

“[The flashing square] is a cue that tells him, ‘This is the movement you’re going to have to make, but don’t make it yet,’” O’Shea says. In effect, by stimulating the premotor cortex, the researchers manipulated the monkey’s motor planning.

Still, the behavioral change is subtle compared with the overt behaviors observed in optogenetic mouse experiments. Researchers have compelled mice to scamper around their cages and avoid social interactions, for instance.

That’s probably because the virus only infects a couple of millimeters of the cortex.

“In mice and rats, when you infect two millimeters of cortex, that is a huge fraction of their brain. When you infect primates, it’s a tiny, tiny piece,” says Charles Kopec, a postdoctoral research associate at Princeton University who uses the method on mice.

O’Shea says it might be possible to solve this limitation in monkeys by injecting several sites at once. Alternatively, researchers could use smaller primates.

At the same poster session, Shenoy’s group debuted optogenetic tools for squirrel monkeys, which are much smaller than macaques. What’s more, squirrel monkeys live in large social groups, which could make them ideal for studying the circuits underlying autism, notes Karl Deisseroth, one of Shenoy’s collaborators and an optogenetics pioneer.

“The reason people haven’t used them is because they’re harder to train. But that just means they end up having more normal behaviors,” says Deisseroth, professor of bioengineering and psychiatry at Stanford University. “So you could study their normal social interactions under various kinds of optogenetic control.”