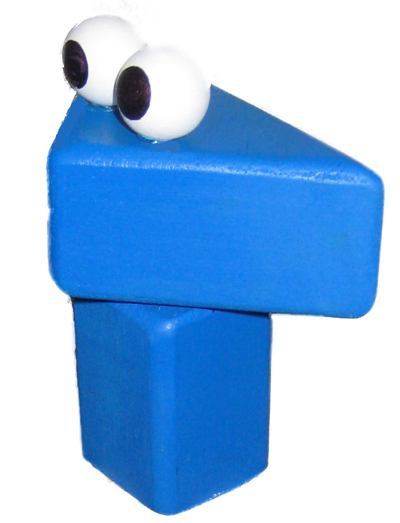 The eyes have it: Adding a pair of eyes to a triangular block gives people with good social skills an advantage in a test of spatial reasoning.

The eyes have it: Adding a pair of eyes to a triangular block gives people with good social skills an advantage in a test of spatial reasoning.

Tweaking a common test of spatial reasoning could help people with autism build social skills, according to unpublished research presented Monday at the Society for Neuroscience annual meeting in Washington, D.C.

People with autism generally have good spatial skills, except at a task known as spatial perspective-taking1. One test of perspective-taking involves looking at a photo of a scene — say, three buildings made from blocks — and then at the scene itself with several small dolls surrounding it. The participant is asked which doll is at the vantage point shown in the photo.

Individuals with autism do poorly at this task because they have trouble imagining what another person sees, says principal investigator Amy Shelton, associate professor of neuroscience at Johns Hopkins University in Baltimore. “What we’ve thought of as a spatial task is really a social one.”

Shelton and her team demonstrated this by setting up a spatial perspective-taking test using triangular blocks in place of the customary wooden dolls, and asking 48healthy adults to do both the triangle and doll versions of the task. The researchers also gathered information about participants’ social skills using the Autism Spectrum Quotient, a commonly used questionnaire.

The participants scored between 0 and 9 on the questionnaire, all below the threshold for an autism diagnosis, but representing a range of social skills in the general population.

The better a person’s social skills, the more accurate he or she is at taking the perspective of the dolls, the researchers found. But there is no relationship between social skills and how people do on the triangle version of the test. These results appeared online in the Journal of Experimental Psychology: General earlier this year2.

In unpublished work presented at the conference, the researchers looked for the boundary between social and non-social versions of the test. When they glued eyes to the triangular blocks, they found that people with better social skills again have an advantage at perspective-taking.

Just calling the triangles aliens turned the task into a social one: Once again, people with better social skills did better on the test thanthose with lower social skills. “We really did not expect to see that,” Shelton says.

It’s not certain how difficulty with perspective-taking affects people with autism in the real world. Shelton says it may make activities such as finding another person in a crowded place, or getting and giving directions, more challenging.

In general, however, studies show that people can improve their spatial skills with practice. The researchers say their results suggest a way to improve perspective-taking in people with autism: They could practice these skills by working up from triangles through triangles with eyes, to dolls and, finally, to other people.

This might also be a strategy to help people with autism become more comfortable with social tasks in general.

The work targets only a subset of social symptoms in autism, notes Damon Tomlin, a postdoctoral fellow at Princeton Neuroscience Institute in New Jersey, who was not involved in the work. But, he says, “It certainly sounds like it has possible therapeutic uses.”

Shelton’s team is studying social and non-social versions of the perspective-taking tests in typically developing children, and is planning to extend the work to people with autism.