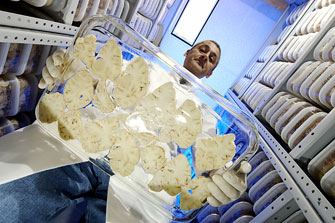 Rare resource: There is a shortage of high-quality brain tissue available for studying aspects of autism.

A new initiative aims to collect brain tissue for autism research, adding welcome resources to the struggling Autism Tissue Program (ATP), according to an announcement today at the 2013 International Meeting for Autism Research in San Sebastián, Spain.

The project, called Autism BrainNet, has $7.5 million in funds for the first five years, and aims to collect, process, store and distribute postmortem brain samples for autism research. It begins with three sites — Mount Sinai School of Medicine in New York, the University of Texas Southwestern Medical School in Dallas and the University of California, Davis MIND Institute.

The network will also integrate the ATP, a collection funded by the research and advocacy organization Autism Speaks. Last year, a freezer malfunction destroyed one-third of the ATP’s frozen autism samples, housed at the Harvard Brain Tissue Resource Center.

But there are still a significant number of frozen and fixed tissues left in the collection, notes Robert Ring, vice president and head of translational research at Autism Speaks. “One-third of the collection was impacted, but not wiped out,” he says.

Autism researchers have long bemoaned the dearth of postmortem brain samples — and the poor quality of the few that are available. The logistics of getting tissues to a collection site rapidly — not to mention the ethical and emotional considerations involved — all work to limit their availability.

In recent years, the ATP has struggled to increase the number of donations. It’s estimated that fewer than six brains are donated to autism research each year. The new brain bank’s mission will be aided in part by a large outreach effort, led by Alison Singer of the Autism Science Foundation.

The goal is to collect brains not just from those with autism but from people with related disorders, from their unaffected siblings and parents, and also from typically developing individuals.

Autism Speaks is donating $2.5 million to the new network, which will be led by David Amaral, director of research at the MIND Institute. The Simons Foundation, SFARI.org’s parent organization, is providing the rest. The project is expected to be operational by the end of the year.

The brain bank has been in the works for years. The two organizations submitted a proposal to the National Institutes of Health (NIH) in 2010, and are still hopeful of its support.

The ultimate goal is to have collection sites across the U.S. and abroad, says Ring. “We are going to need additional resources to do that,” he says. “One seat we’d like to see [filled] is by the NIH.”