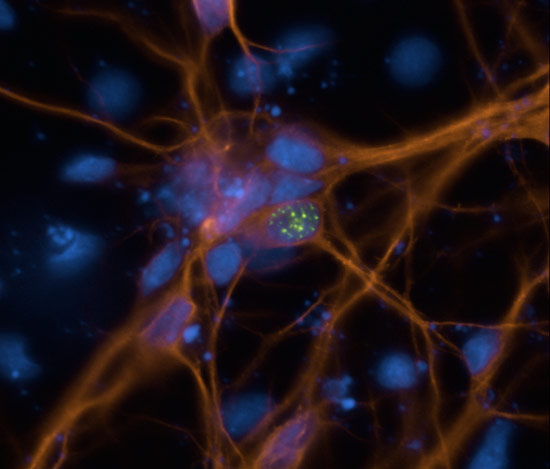 A common variant of a gene called CACNA1G — which makes a channel that helps regulate calcium flow between cells — may increase the risk of developing autism, according to research published in Molecular Psychiatry1. Because boys are more likely to carry the variant than girls, the finding could partially explain the disorder’s strong male bias.

Calcium channels are the cellular gatekeepers of calcium ions, which are required for muscle cells to contract and brain cells to fire. The new findings bolster emerging evidence that these channels play a critical role in autism and other neurological disorders, researchers say.

“It’s now the fifth or sixth time that a voltage-gated calcium channel has been identified genetically as being important in autism,” says Ricardo Dolmetsch, an assistant professor of neurobiology at Stanford University, who was not involved with the new work. “I think now it is no longer a coincidence.”

Several commonly used pharmaceutical drugs alter the balance of calcium inside and outside of cells in order to treat high blood pressure, migraines, and other conditions. Researchers could develop similar drugs to treat some symptoms of autism, according to Dolmetsch and other experts.

In the new study, published online in May, scientists screened for single-base alterations in DNA from a specific region of chromosome 17 that had been previously linked to the disorder in boys2. The researchers drew from 1,046 blood samples in the Autism Genetic Resource Exchange, a gene bank of families affected by autism. Of these, 284 samples came from families with two or more sons with autism.

Interestingly, calcium channels are thought to be regulated differently in men and women. Although the mechanisms are unclear, some experts say that sex hormones such as estrogen — which regulates reproduction and the development of sexual characteristics in women — are responsible for the differences.

In female guinea pigs, estrogen increases the expression of calcium channels and the flow of calcium in specific brain areas3. The link between estrogen and calcium channel regulation has not been found on the molecular level in people, but it’s a plausible idea, given that sex hormones contribute to differences in brain development beginning in the fetus and lasting through adulthood, notes Stanley Nelson, professor of human genetics at the David Geffen School of Medicine at the University of California, Los Angeles.

“The finding certainly opens up an intriguing area to think about in terms of calcium alterations that are somewhat sex-specific,” he adds.

Nelson cautions, however, that the CACNA1G variants identified in the new study confer only a small degree of risk. That means other, unknown variants also contribute to autism. Nelson’s group is continuing to search chromosome 17 to pinpoint additional risk variants.

“The next phase is to express the variants in cell culture and ask whether the cells behave differently,” Nelson says.

In brain cells, calcium channels are normally closed. When electrical changes inside the neuron trigger the channels to open, positively charged calcium ions rush into the cell, prompting, among other things, changes in gene expression, or the release of signaling molecules such as hormones.

Researchers say that the type of calcium channel that CACNA1G makes could spur neurons to fire abnormally. Previous studies have linked the gene to idiopathic generalized epilepsy, a group of seizure disorders that usually appear in early childhood and are caused by excess neuronal excitability4.

In 2004, researchers first showed that mutations in the CACNA1C gene, which codes for a type of calcium channel expressed in the heart and brain, causes Timothy syndrome, a rare disorder characterized by a specific irregular heartbeat5. Many people with the syndrome also show features of autism, such as impaired social skills and language delays.

Mutations in yet another calcium channel gene, CACNA1H, have also been linked to autism in a small subset of people, according to a 2006 study6. The researchers also found that these mutations reduce the activity of calcium channels in human cells in culture, suggesting that they could affect neuronal function and brain development.

Variations in calcium channel genes occur not only in autism, epilepsy, and Timothy syndrome, but also in psychiatric disorders such as bipolar disease and schizophrenia, says John Jay Gargus, a professor of pediatrics at the University of California, Irvine, School of Medicine.

“Probably the same susceptibility genes are contributing to those abnormal neurological networks, and those genes play a critical role in calcium signaling in the synapses,” he says.

Gargus and Dolmetsch say the emerging link between calcium channels and autism is good news because it opens up new therapeutic possibilities.

“It’s unlikely that off-the-shelf calcium channel drugs will work [for treating autism], but the bottom line is that if you want to go for a ‘drug-able target’, ion channel drugs have proven to be very potent,” Gargus says.

That’s because ion channels are usually exposed on the cell’s surface. They also have many working parts — such as the center ion pore or the outer gating mechanisms — each of which could be targeted by small-molecule drugs.

For example, after finding mutations in potassium channel genes in people with a rare form of epilepsy, researchers developed a drug that selectively opens neuronal potassium channels. The drug, retigabine, has worked well on this population in early clinical trials.

Thanks to the new study and others like it, doctors may be able to screen children with autism for calcium channel variants to identify those for which such drugs could work, Dolmetsch says.