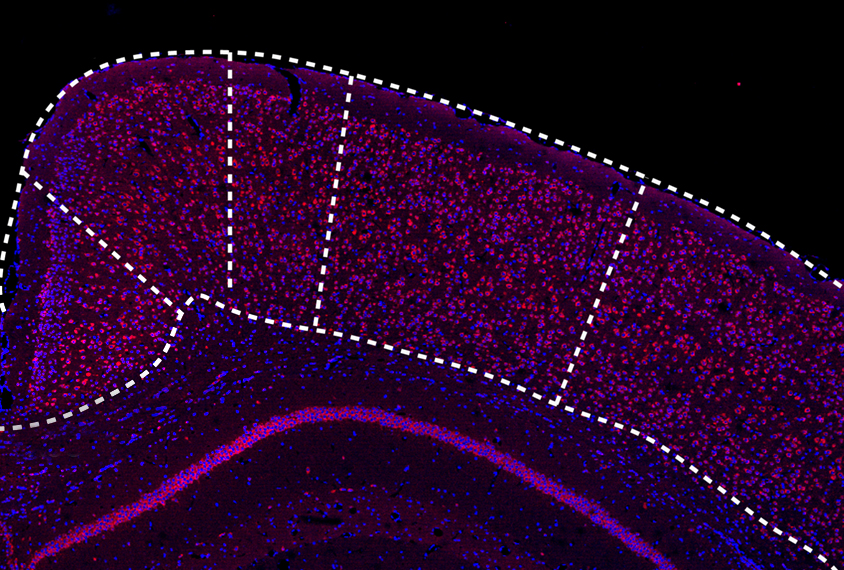 Social connections:: The gene SENP1 is highly expressed in wildtype mice in the retrosplenial cortex, which connects the sensory cortex to the hippocampus.

An imbalance of excitatory and inhibitory cell signaling in a brain area called the retrosplenial cortex (RSC) may contribute to atypical social behaviors, according to a new study in mice.

The retrosplenial cortex connects the sensory cortex to the hippocampus, and preliminary evidence hints that it may also shape social traits. Mice given the anesthetic ketamine to enter a dissociative state — which includes decreased social interaction — have altered activity patterns in the RSC, according to a 2020 study. And mice that model fragile X syndrome, which is often accompanied by autism, have less activity in the RSC during social situations than do their wildtype counterparts, according to an unpublished study from earlier this year.

In the new work, published in November in Cell Reports, researchers linked a region of the RSC to atypical social behaviors in mice missing a copy of the gene SENP1. The team found the mutation in an autistic person without developmental delay, suggesting that it affects social behaviors but not cognition.

“It tells us that we might be able to find some new regions implicated in social behavior,” says lead investigator Zilong Qiu, a researcher at the Institute of Neuroscience at the Chinese Academy of Sciences in Shanghai.

Because SENP1 regulates FMRP, the protein missing in people with fragile X syndrome, the findings may point to a shared pathway between the conditions, says Karun Singh, senior scientist at the Krembil Research Institute at University Health Network in Toronto, Canada, who was not involved in the study.

“It just adds to the growing evidence of convergent signaling” in autism, Singh says.

The impetus for the new study came from a Chinese autism cohort that Qiu and his colleagues are assembling. Among more than 700 autistic people in this cohort, the team identified a person with a rare protein-truncating variant in SENP1. Mutations in SENP1 had previously been linked to metabolic disorders but not to autism.

Mice missing a copy of SENP1 also showed autism-like traits, spending less time interacting with other mice than controls did, and more time on repetitive behaviors, the team found. And, similar to the autistic person, the animals had no problems with learning and memory.

Compared with wildtype mice, the SENP1-deficient mice had decreased expression of SENP1 protein throughout the brain. But the dearth of protein was particularly stark in a subregion of the RSC called the retrosplenial agranular cortex. The distribution of neurons within the RSC was also atypical: The model mice had more cells that express the proteins parvalbumin and somatostatin — two markers for inhibitory neurons.

When the researchers recorded the activity of cells in the RSC, they found the SENP1-deficient mice had higher levels of inhibitory signaling and lower levels of excitatory activity. The model animals’ dendrites — the signal-receiving projections on neurons — were poorly developed in the RSC, and the excitatory synapses were immature as well.

SENP1 encodes a protein that removes chemical tags called SUMO groups from other proteins. Modifying these tags can change how proteins, including FMRP, function. FMRP proteins retain an atypically high number of SUMO tags in SENP1-deficient mice, Qiu and his colleagues found, particularly in the RSC, which may explain why the model mice have unusually low levels of FMRP in this brain area.

“That tells us again [that] retrosplenial [cortex] might be a very interesting brain region — it’s highly specialized,” Qiu says.

It’s still unclear why SENP1 has this specific role in the RSC, the team acknowledges, or whether the gene operates the same way in people.

And because the SENP1 mutation was found in only one person within the cohort, “it is likely LOF [loss of function] mutations in SENP1 are a very rare contributor to autism,” says Jimmy Lloyd Holder Jr., assistant professor of pediatrics, neurology and developmental neuroscience at Baylor College of Medicine in Houston, Texas, who was not involved in the study. Identifying more people with such a mutation would help confirm the gene’s link to autism, he says.

Even so, other forms of autism may share the RSC inhibitory dysfunction seen in this mouse model — something that Qiu says he and his colleagues plan to investigate in future work.

“I would not be surprised if it were so,” says Alessandro Gozzi, senior researcher at the Istituto Italiano di Tecnologia in Rovereto, Italy, who was not involved in the work. “I actually believe the RSC is an understudied yet key player of social encoding in rodents.”

If that’s the case, it may be possible to alter activity in the area — and thus social behaviors —using transcranial magnetic stimulation or some other approach, says study investigator Fei Li, chief physician and professor of pediatrics at Xinhua Hospital at Shanghai Jiao Tong University School of Medicine in China.

“It’s kind of a cue to let the neurologist or the physician … think about autism in a different way,” Li says.