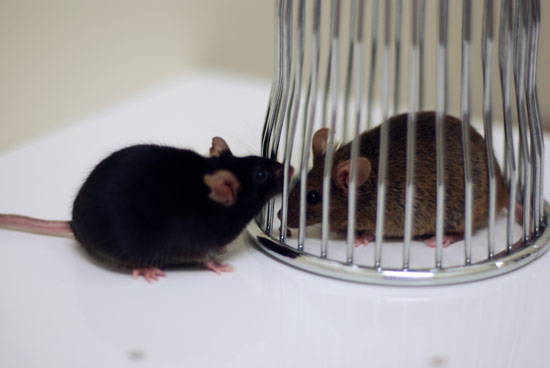 Social animal: The loss of one copy of the GTF2I gene increases overly social behavior in mice, mimicking the features of Williams syndrome.

Mice lacking one copy of a gene associated with Williams syndrome share the hyper-sociability of people with the disorder, according to a paper published online 3 December in Autism Research1.

The gene, GTF2I, is one of a handful that researchers have recently tapped as key players in Williams syndrome. The protein it encodes is a transcription factor, affecting the expression of other genes, but its precise role is unknown.

In addition to illuminating the genetic roots of one aspect of Williams syndrome, the new work could provide insights into disruptions in social behavior in autism as well.

Though the extreme sociability of Williams syndrome appears to be the opposite of the social withdrawal seen in people with autism, people with either condition have difficulty with reciprocal interactions. About half of people with Williams also meet the criteria for autism.

Overly friendly even with strangers, people with Williams syndrome may also have cognitive impairment, anxiety and difficulty processing spatial information. They also have distinctive facial features, such as a small nose with a flattened bridge, and a small chin.

Williams syndrome is caused by the deletion of a large chunk of DNA, usually spanning 28 genes, on chromosome 7. “The question of which of these genes is doing what has been a really intense one for the people in the field,” says Joseph Buxbaum, director of the Seaver Autism Center at Mount Sinai School of Medicine, who led the new study.

In recent years, mouse models and studies of rare individuals who have smaller deletions in the Williams syndrome region have helped scientists make gradual progress on this question.

For example, one individual who has a deletion that spares GTF2I has other characteristics of Williams syndrome but shows normal social behavior2. Another person lacking GTF2I but with other Williams genes intact is hyper-social, but doesn’t have the physical features typical of the disorder3.

In the new study, researchers tested the role of GTF2I in a mouse model by inactivating one copy of the gene. The resulting mice produce about half the normal amount of the GTF2I protein.

The team then tested the GTF2I-deficient mice to see if they had any characteristics similar to those of people with Williams syndrome.

“They screened these animals for quite a wide range of behavioral phenotypes,” says Andrew Holmes, chief of behavioral science and genetics at the National Institute on Alcohol Abuse and Alcoholism, who was not involved in the work. “What they pulled out was a specific change in social behavior.”

Control mice are interested in novelty — they eagerly investigate a new mouse or object placed in their cage. Once they’ve sniffed around a bit and the item becomes familiar to them, they lose interest, a process known as habituation.

When the GTF2I-deficient mice are shown a familiar object and a new object, however, they’re equally interested in both. And when a new mouse is introduced into their environment, they don’t habituate as rapidly as control mice.

Buxbaum says this enhanced interest lends support to the hypothesis that GTF2I is involved in social behavior. But other researchers note that that’s not the only plausible interpretation of the results.

For example, difficulties with habituation may reflect lower intelligence: if the mice don’t remember what they’ve seen before, then they remain interested in things that should be familiar, notes Lucy Osborne, associate professor of medicine and molecular genetics at the University of Toronto.

This idea is also consistent with evidence from people with atypical Williams syndrome deletions, she says. “If you have GTF2I spared, on average it increases your [intelligence quotient] by 20 points.”

The GTF2I-deficient mice don’t have more anxiety or hypersensitivity to sound, two characteristics frequently seen in people with Williams syndrome. They are able to navigate two standard tests of learning and memory — the Morris water maze and the Y maze — just as well as control mice can.

Buxbaum plans to conduct additional behavioral tests that could help researchers understand the altered social behavior, and to examine how GTF2I interacts with other Williams syndrome genes.

More than one gene may contribute to social abnormalities in the disorder. For example, a study published in October found that mice lacking a protein called PSD-95 have increased social behaviors4. These mice also have lower expression of CYLN2, a gene in the Williams syndrome region.

“A really interesting question is: Are there semi-redundant functions of these genes?” says Holmes, who led the PSD-95 study. Either CYLN2 or GTF2I could cause the hyper-sociability characteristic of Williams syndrome, or perhaps both genes must be deleted in order to show the full effect.

These efforts to understand abnormal social behavior in people with Williams syndrome may help study autism as well. “Any social gene has got something to do with autism,” Buxbaum says.