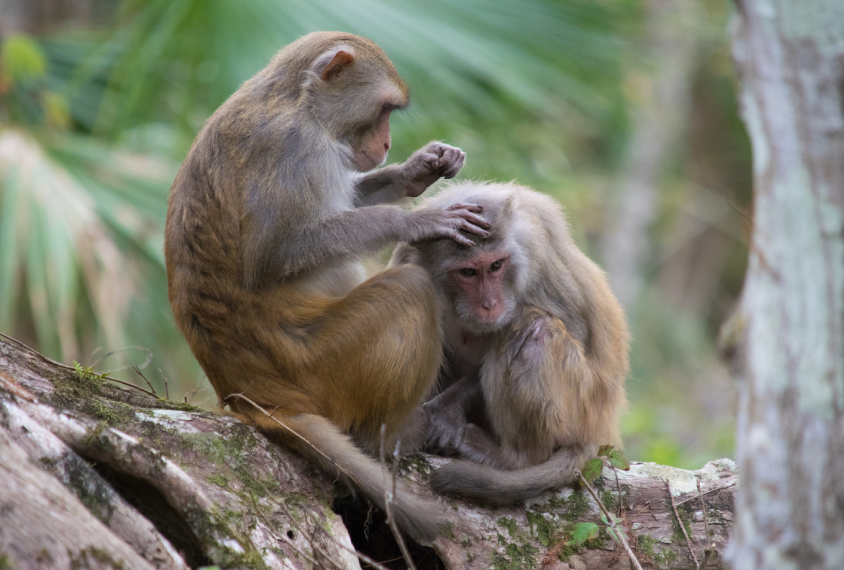 Male monkeys that avoid touching, grooming or playing with others have low brain levels of the hormone vasopressin, according to a new study. Low levels of vasopressin in the brain also characterize boys with autism, the study found1.

Vasopressin and the related hormone oxytocin control a variety of social behaviors. Both hormones have been touted as potential treatments for autism.

The findings hint that vasopressin levels are a useful marker for autism. They also support the idea that boosting these levels improves social functioning. The study appeared 2 May in Science Translational Medicine.

“This is some preliminary evidence to suggest that vasopressin could be a marker of impaired social function in both monkeys and humans,” says lead investigator Karen Parker, associate professor of psychiatry and behavioral sciences at Stanford University in California. “I think the obvious next step would be to say, ‘Well, maybe we need to replace vasopressin.’”

Parker’s team measured several chemicals in samples of blood and cerebrospinal fluid in the monkeys, and vasopressin alone proved to be the best social gauge.

“Autism is hugely complicated and yet, at least in this one instance, there was one molecule whose concentrations in the central nervous system predicted social function,” says Michael Platt, professor of psychology at the University of Pennsylvania. Platt led the study in Scientific Reports but was not involved in Parker’s study. “I think that’s very surprising.”

However, the researchers caution that the findings from both studies are preliminary and need to be replicated. It is also unclear whether low vasopressin levels are unique to autism or are a feature of other psychiatric conditions as well.

The rhesus monkeys in Parker’s study live in half-acre corrals, each with up to 221 animals, at the California National Primate Research Center in Davis. The monkeys range in age from 1 to 5 years.

Parker and her colleagues monitored the social behaviors of 42 monkeys for 10 minutes twice a day for 8 days. These monkeys showed a wide range of sociability in tests conducted when they were 3 to 4 months old.

The team identified the 15 most and 15 least sociable monkeys by observing how often they interact by, for example, chasing, wrestling with or grooming others. They drew samples of blood and cerebrospinal fluid and measured levels of vasopressin and oxytocin. They also measured the expression of the receptors for these hormones, as well as molecular activity in two signaling pathways linked to autism, PI3K and RAS/MAPK.

The researchers used a machine-learning algorithm to identify the markers that distinguish the low- and high-social monkeys. The combination of oxytocin and vasopressin levels in cerebrospinal fluid, along with the activity of the PI3K pathway in blood, correctly classified 24 of the 27 monkeys. (The researchers only had complete data for these 27 monkeys.)

Statistical analyses revealed that the level of vasopressin in the cerebrospinal fluid is the most robust marker of sociability in the monkeys. Levels of this hormone are significantly lower in low-social monkeys than in their more social peers.

These findings held up in an independent set of 15 low-social monkeys and 15 high-social ones from the same colony. Levels of vasopressin in cerebrospinal fluid alone correctly classified 28 of these 30 monkeys.

This specificity surprised some experts.

“If I had to guess ahead of time which one would be lower in the low-social guys, I would have picked oxytocin,” says Larry Young, chief of behavioral neuroscience and psychiatric disorders at Emory University in Atlanta, who was not involved in the work. “But I would have been wrong.”

Parker and her colleagues then measured vasopressin in the cerebrospinal fluid of seven boys with autism and seven age-matched controls. The samples had been drawn for conditions unrelated to autism, such as cancer.

“That’s a really valuable approach, starting with the rhesus macaques and then being able to quickly take a look in a population with a diagnosis,” says Elizabeth Hammock, assistant professor of psychology and neuroscience at Florida State University in Tallahassee, who was not involved in the study.

Vasopressin levels in some of the boys with autism overlap with those in the controls. So the hormone may be an indicator of social function in only some people with autism, she says.

One open question is whether low vasopressin levels are a cause or a consequence of low sociability.

“If you were to take some monkeys and separate them so that they can’t have social interactions, would they then have lower vasopressin?” Young says.

In this study, seven male rhesus monkeys inhaled either vasopressin, oxytocin or placebo, and the researchers recorded how much time the animal spends gazing directly at or away from an untreated monkey seated across from it. (Direct gaze is a sign of dominance, and looking away is a sign of submission.)

In pairs of control monkeys, one monkey frequently looks at the other, and the length of its stares increases with time — a sign of dominance. The hormone-treated monkeys remain more relaxed: They do not stare for as long as controls do, the researchers found. This effect is stronger for vasopressin than for oxytocin.

The findings raise the possibility that vasopressin treatment would ease social difficulties in people with autism.

But vasopressin may not always be deficient in people with autism. Paradoxically, researchers at the Swiss drug company Roche have unpublished evidence that blocking the receptor for vasopressin — which would decrease vasopressin signaling — improves social function in men with autism.

In February, the U.S. Food and Drug Administration gave the drug, called balovaptan, ‘breakthrough therapy’ status, meaning it can move quickly through the approval process. And at the International Society for Autism Research meeting in May, researchers from Roche presented evidence that the drug improves social interactions in mice lacking CNTNAP2, a gene linked to autism.