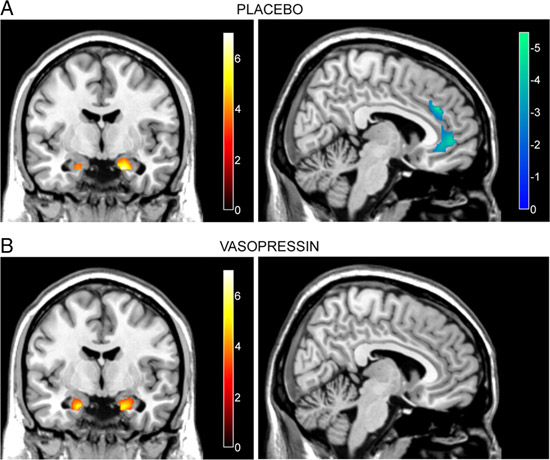 Compared with the trust-inducing oxytocin or the fight-or-flight power of adrenaline, vasopressin may seem rather dull. The hormone is known mostly for its ability to control blood pressure and water absorption in the kidneys.

In the past few years, though, studies have revealed vasopressin’s flashier side. It turns out that the hormone controls emotions including anxiety, fear and aggression. A new study in the Journal of Neuroscience for the first time pinpoints the brain circuits that underlie these abilities.

Inhaled vasopressin has been shown to provoke aggressive responses to faces, and to cause people to judge others’ faces as less friendly, than they would otherwise.

Last year, brain-imaging guru Andreas Meyer-Lindenberg scanned people who carry common variants of the vasopressin receptor gene that have been linked to autism. These people show unusual activity patterns in the amygdala — a deep region related to emotional processing — in response to unpleasant facial expressions, he found.

In the new study, his team gave a nasal dose of vasopressin to healthy men and then scanned their brains while they looked at frightened or angry faces, but they didn’t find any unusual activity in the amygdala. This was surprising, not only because of the earlier genetic study, but because of work showing that nasal oxytocin — which is structurally similar to vasopressin — dampens activity in the amygdala.

It’s possible that vasopressin affects the amygdala only indirectly, through some kind of feedback loop. Bolstering this idea, the researchers found that men receiving vasopressin show a defective connection between the amygdala and the prefrontal cortex, the outer brain layers involved in high-level thinking.

Based on all this, the researchers propose that normally, the cortex sends negative signals to the amygdala to dial down the fear response, but in the presence of vasopressin, this loop is somehow interrupted, leading to more aggressive behaviors.

Because oxytocin is emerging as one of the few effective treatments for autism, unraveling these complicated circuits could be a fascinating avenue of research. Vasopressin, you see, is anything but dull.