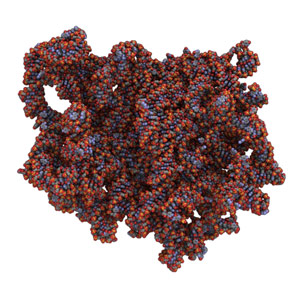 Central dogma: EIF4E, an autism-linked gene, binds to genetic messages and shuttles them to the machinery that turns them into proteins.

Elevated levels of EIF4E, which plays a key role in protein synthesis, lead to autism-like behaviors and abnormal neuronal signaling in mice, according to a study published 17 January in Nature1. The findings support the theory that an excess of proteins at neuronal junctions may underlie fragile X syndrome and autism.

EIF4E binds to genetic messages and brings them into contact with the ribosome, the cellular structure that translates them into proteins. Studies have shown that elevated protein synthesis is a feature of autism-related disorders, in particular, fragile X syndrome.

A number of threads connect EIF4E activity to autism. EIF4E is the ultimate step in both the mTOR and the PTEN signaling pathways, which may both play a role in autism. And EIF4E works in conjunction with FMRP, the protein missing in fragile X syndrome, which itself stalls translation.

A 2009 study found a hyperactive form of EIF4E in three families with autism2. And a study last year found that elevated EIF4E boosts production of the autism-linked protein neuroligin-1. Mice that lack 4E-BP2, a protein that keeps EIF4E activity in check, also show autism-like behaviors, which are alleviated by inhibiting EIF4E3.

In the new study, researchers boosted EIF4E expression in mice and confirmed that this leads to increased protein synthesis in neurons. These mice groom more and are more intent on burying marbles placed in their cages than are controls. Both of these observations are reminiscent of the repetitive behaviors seen in people with autism.

The mice are also less likely to adapt to change than controls are: It takes them longer to figure out that the location of an escape platform in a tub of water has been changed.

Unlike controls, the mice with elevated EIF4E do not prefer another mouse to an object, which is suggestive of the social deficits seen in autism.

Neuronal signaling is altered in brain slices of these mice. The neurons send more activating signals and stronger inhibiting signals than do those from controls. They also have denser and smaller dendritic spines, the signal-receiving branches of neurons, than controls do.

The researchers treated the mice with 4EGI-1, a compound that blocks EIF4E’s access to the ribosome. The treatment normalizes protein synthesis and alleviates autism-like behaviors in the mice, the study found. In particular, the treated mice show a preference for interacting with a mouse over an object in their cage.