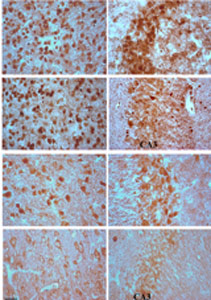 Two studies report abnormalities in the system that mediates the body’s response to stress in mouse models of autism-related diseases: Angelman syndrome and Rett syndrome. The results were published in the April issue of Human Molecular Genetics1,2.

The studies suggest that a stress pathway mediated through glucocorticoid signaling could underlie autism symptoms, such as anxiety in social situations3. Angelman syndrome and Rett syndrome stem from different mutations, but both have overlap with autism, including speech and social impairments.

Glucocorticoid receptors are signaling molecules that are internal to cells. When bound by cortisol, a stress hormone, these receptors move into the nucleus where they turn genes on or off.

Angelman syndrome is caused by a mutation that inactivates the maternal copy of UBE3A, which codes for a protein best known for its role in tagging other proteins for destruction. The first study reports that glucocorticoid-mediated gene expression may get help from UBE3A. UBE3A interacts directly with glucocorticoid receptors in neurons, the study found. And mice that model Angelman syndrome show lower expression of three genes activated by glucocorticoid receptors, compared with controls.

The second study finds that blocking the interaction between cortisol and glucocorticoid receptors can rein in some of the runaway gene expression found in a mouse model of Rett syndrome. These mice lack MeCP2, a master regulator of gene expression.

Glucocorticoid receptors have been shown to regulate the expression of two MeCP2-dependent genes in mice4. Blocking these receptors returns the expression of these genes to normal levels and relieves Rett-like symptoms such as hind-limb clasping, which may mimic the hand flapping seen in individuals with the syndrome, the study found.

The researchers suggest that the glucocorticoid pathway may be a therapeutic target for normalizing gene expression and behaviors associated with Rett syndrome.