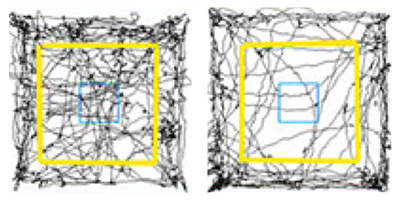 The motor problems seen in Rett syndrome may be the result of deficits in a pathway that mediates reward in the striatum, a brain region that coordinates movement, according to a study published 12 November in Brain Structure and Function1.

Rett syndrome, which is usually caused by mutations in the MeCP2 gene, is characterized by intellectual disability and a loss of language around 2 years of age. Children with the syndrome also have severe problems with motor skills, which worsen with age.

In the new study, researchers characterized motor skills in mice that model Rett syndrome. These mice are lethargic, exploring less of their environment than controls do, and they are clumsy: They fall more easily when trying to balance on a rotating rod.

Studies have shown that loss of MeCP2 in the front of the brain, or forebrain, is sufficient to lead to Rett-like symptoms in mice. The forebrain includes the striatum, which integrates information from other brain regions to help plan and coordinate movement.

The new study found that mice that model Rett syndrome have significantly less dopamine — a chemical messenger that mediates reward — in the striatum than controls do. The researchers also observed altered expression of two genes (TH and DRD2) that regulate dopamine signaling, consistent with MeCP2’s role as a regulator of gene expression. Compared with controls, cells in the striatum of the Rett mice have less TH, which is a precursor to dopamine production, and more DRD2, which is a receptor for dopamine.

A certain type of neuron, called fast-spiking parvalbumin interneuron, works to dampen the motor signals sent out by the striatum. There are more of these neurons in the mice lacking MeCP2 than in controls, the study found.

Together, these observations suggest that changes in dopamine levels influence neural circuits in the striatum that regulate motor function, the researchers say.