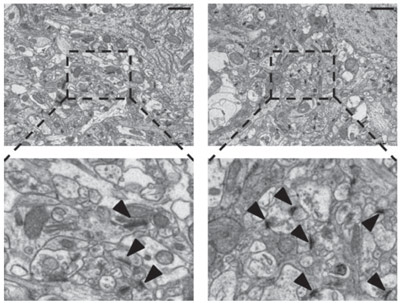 Signal site: Male rats exposed to an epilepsy drug in utero (right) have a higher density of proteins at the signal-receiving ends of their neurons than controls (left) do.

Prenatal exposure of rats to the epilepsy drug valproic acid (VPA) leads to behavioral and brain features that resemble autism, in males more than in females, according to a study published in the March issue of the Journal of Neurochemistry1.

The results suggest that this model could shed light on why so many more boys than girls are diagnosed with autism, the researchers say.

Scientists have known for more than 20 years that exposure to VPA during pregnancy may lead to birth defects and boost autism risk. Pregnant rodents exposed to VPA give birth to offspring with autism-like features, such as social deficits and abnormal brain waves.

But these studies have focused primarily on male offspring, even though risk factors may affect females differently.

Autism is about four times more prevalent in males than in females. There are several possible reasons for this skewed ratio, including diagnostic bias. But other studies suggest a more fundamental difference: Girls may be protected from autism and need to have more genetic or environmental risk factors to develop the disorder than boys do.

In the new study, researchers compared the effects of pregnant rats’ exposure to VPA on their male and female offspring. The female offspring have milder social deficits and are less susceptible to seizures caused by electric shocks than are males, they found.

Other deficits are present at equivalent levels in both genders, the study found. Both male and female offspring have a crooked tail, which is a marker of birth defects in the spinal cord, also called neural tube defects — a known effect of VPA exposure.

In both genders, VPA also boosts the production of vGLut1, a protein that enhances excitatory brain signals, and lowers the expression of GAD67, which is involved in inhibitory signaling. An imbalance in excitatory and inhibitory brain signaling is a popular hypothesis for the neuronal dysfunction that underlies autism.

The results suggest two distinct mechanisms to explain the effects of VPA exposure — a signaling imbalance and excess protein at the signal-receiving end of neuronal junctions — only one of which is seen in female rats, the researchers say.

This headline for this article has been changed. The original headline incorrectly referred to mice instead of rats.